A palette of possibilities has long been a goal of Morningside University’s Visual Arts department. That ideal was in full conception this summer as associate professor and head of the department Shelby Prindaville performed a first of its kind artist residency for the Louisiana State University School of Veterinary Medicine. 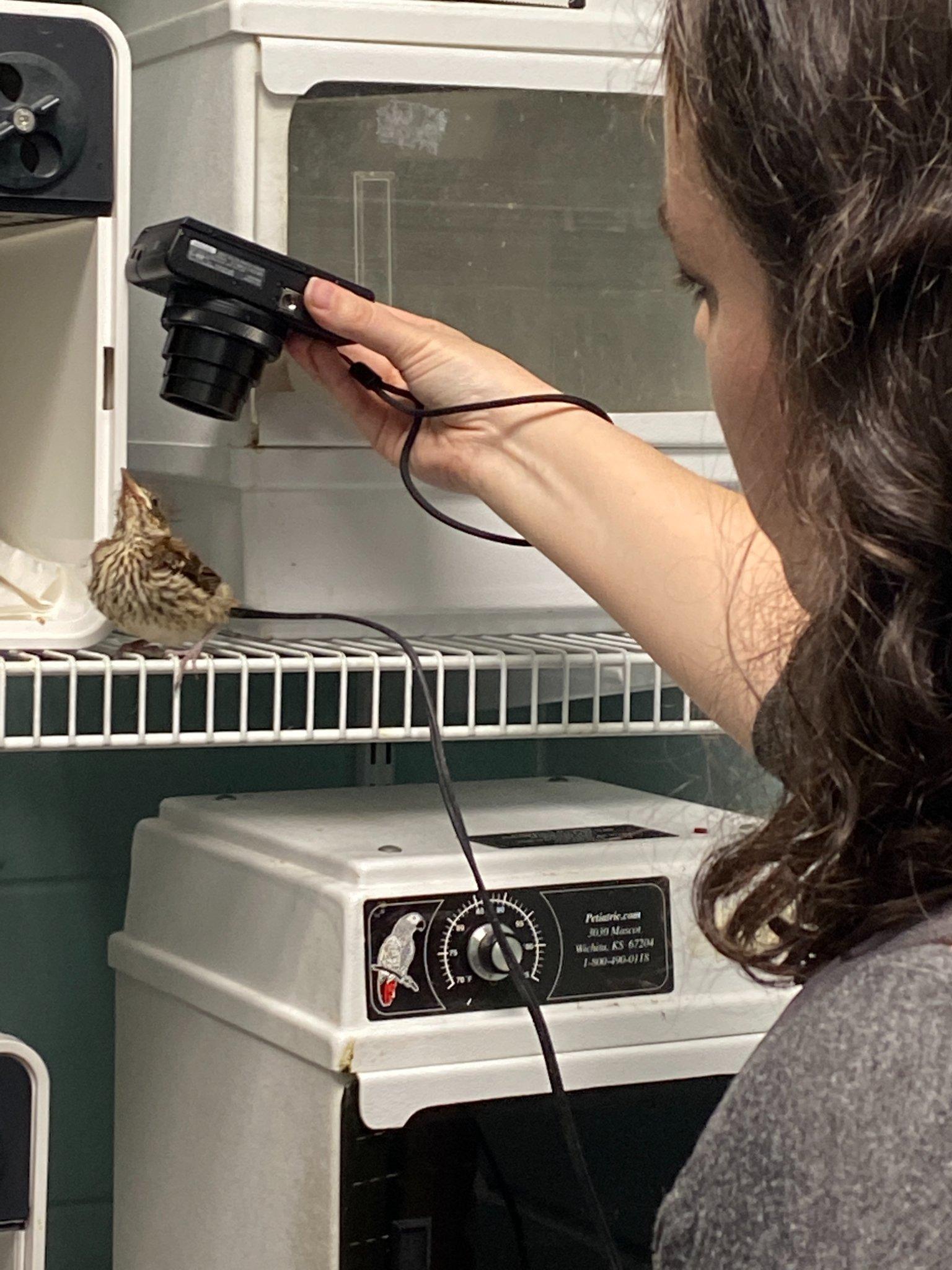 Dr. Prindaville works with a brown thrasher during her residency.Prindaville’s professional background was an immediate draw when the Baton Rouge university began to think about artists to handle what would be a momentous occasion. “My work has always been a hybrid of science and art,” she reflected. “My artwork frequently involves botany, ecology, and biology, with chemistry being in the mix as well. I’ve even helped create a new polymer clay in collaboration with LSU chemistry professor Dr. John Pojman.”

“LSU’s veterinary school wanted a first along similar lines, by combining creations of art and science in this trailblazing first artist residency at a veterinary school,” she continued. “At first, they were just consulting with me about artist residencies in general rather than looking at me to perform the residency. There were other hurdles in the beginning as well, as LSU’s Board of Directors wanted to make sure this initiative was worth the investment of time and resources. I helped them craft an idea that was advantageous to both the artist and the vet school. By the time we finished the discussion, they liked what I had to say and knew having a veteran artist in residency would make the collaboration successful.”

The chance also meant something much more to Prindaville as she realized it could lead to future possibilities at Morningside University. “Art is the synthesis of everything,” she noted. “It can be whatever a person wants, and there are ways every discipline on our campus can be used in our artwork and studies. The residual opportunities are endless. It’s very exciting to get to spearhead new collaborations between the sciences and art.”

Prindaville reflected on the moment when LSU chose her for the assignment. “When they surprised me by asking if I would be the inaugural artist in residence this year, I told them it had to morph from a planned school-year residency into a summer one to accommodate my teaching schedule, and they immediately gave me the go ahead,” she said. “The quickness in how this was approved was remarkable. State institutions have massive bureaucracy. As an example, their school of art had building renovations approved in 1982, and construction began last year. The veterinary medicine school managed to get a contract to me by February 2022 after opening discussions in November 2021.”

With the backing of the University behind her, Prindaville’s creative juices flowed from day one. “Their assessment was that it would be a success,” she reflected, “They wanted me to come and lay the foundation for the future by what I would do now. I’ve previously done artwork with animal subjects, but never in a vet school setting,” she added. “I think it helped having prior experience in residencies. I had a sense for how I wanted to approach this. There was a definite angle towards using local and site-specific materials. I wanted my work to truly capture the atmosphere of the LSU School of Veterinary Medicine after traveling so far to take it on.”

Her creativity didn’t end there. “I explored novel ways to produce pieces,” Prindaville said. “I had a lot of meetings with different areas including equine, zoo med, large animal, small animal, wildlife, research, and epidemiology. I wanted to get a sense for what they did and the tools, materials, chemicals and medicines they used in the process.” 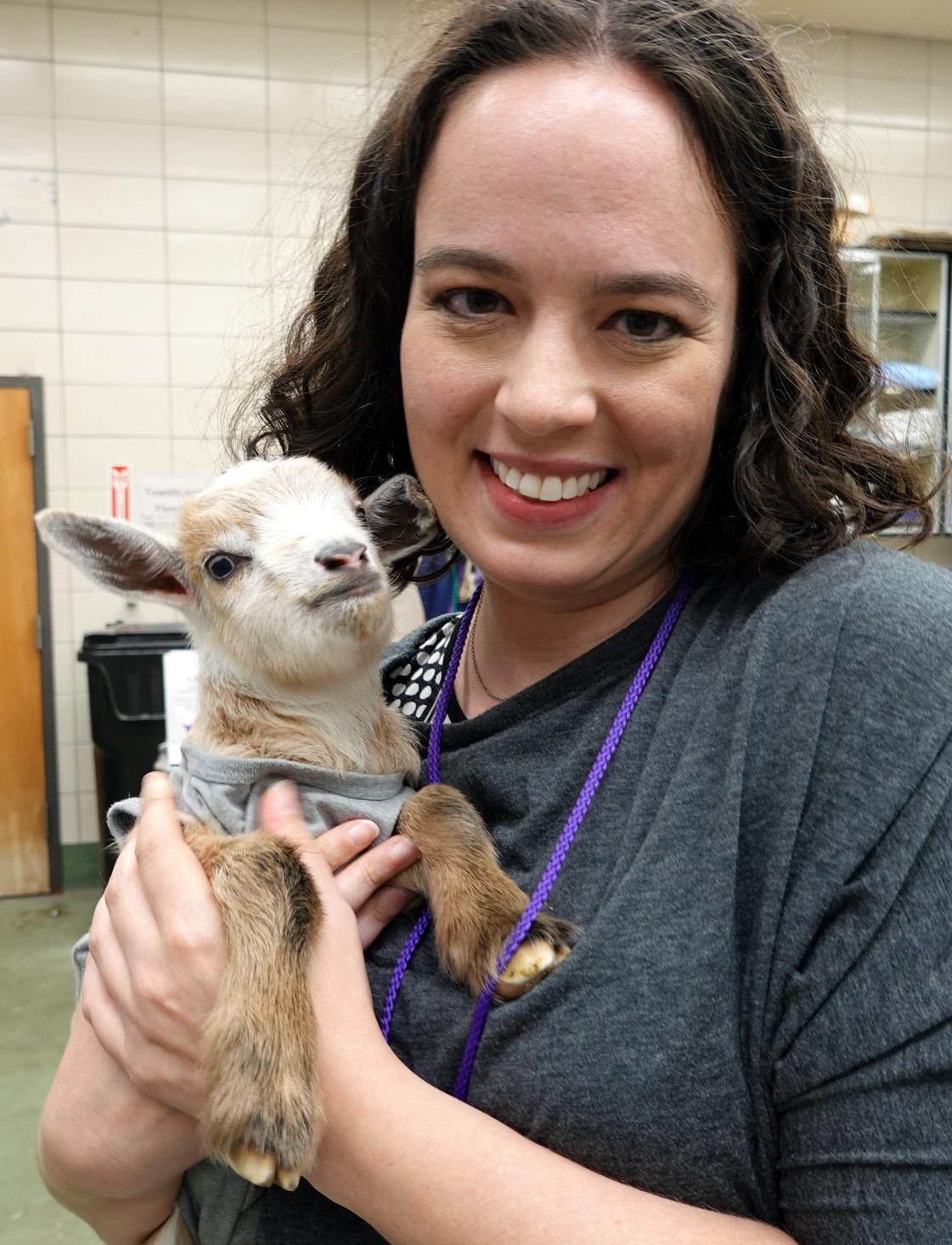 Lurch, one of the Nubian goats that Dr. Prindaville used as inspiration for an exhibit painting.

“There were a great number of assets I put into play,” she added. “I created a body of ceramics by building pieces around bones or impressing them into the clay to create patterns. I also took advantage of stains from pathology and histology labs and medicines and chemicals from different hospitals within the veterinary school. On the tools front, I incorporated a disbudding instrument for goats, a pig board, mosquito netting, and oviposition paper, and even artificial turf. It was all about innovatively finding ways to incorporate these items used in a scientific medical context into art - a fusion of two disciplines.”

When the residency concluded, Prindaville had given the vet school and LSU exactly what they hoped. Her show featured 20 exhibitable pieces ranging from painting to sculpture to ceramics. “It was very interdisciplinary and experimental, and I was really happy with the level of productivity I achieved,” she shared.  “I’m not entirely sure how archival some of the pieces are due to their novel media, but it will be interesting to see how they age over time.  I’ve already learned that methylene blue counterstain is quite fugitive, meaning its pigmentation bleaches out of the stained areas of the artwork over time.”

Prindaville’s show is planned as a centerpiece for Eppley Art Gallery in 2023-24, as the galleries are already booked for the current academic year. It can currently be seen as part of her broader body of work at Lauritzen Gardens, part of the Omaha Botanical Center, and is planned for exhibition in rural St. Louis in October.  She is also participating in a three-person show at the Betty Strong Encounter Center in Sioux City in October that will feature a different series of pieces created at her summer 2021 artist residency at Whiterock Conservancy near Coon Rapids, Iowa.