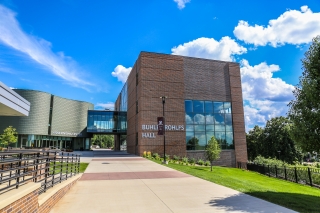 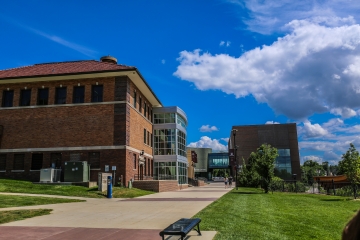 Buhler Rohlfs Hall was constructed in 2014 and is the first completely new classroom building to be built on campus since 1974. This hall including offices and classrooms for the Regina Roth Applied Agricultural and Food Studies Program, the Sharon Walker School of Education, and the Nylen School of Nursing. It is located on the south end of campus, connected to the Krone Center, and offers state-of-the-art nursing equipment, study areas, and an elevator with access to the Hilker Campus Mall.

Charles City College Hall was built in 1890 and was the first building on Morningside’s campus, actually including all housing, dining, academic, and administrative processes to begin with. It is now listed individually on the National Register of Historic Places and houses classrooms and offices for the Department of Humanities, specifically History.

The building that now houses the Hickman-Johnson-Furrow Learning Center was originally constructed in 1913 and served as a gymnasium. It was later renovated into the Wilhelmina Petersmeyer Library and Marian Jones Hall of Culture in 1955, expanded in 1984, and redesigned as a Learning Center in 2005.

Most often referred to as the Library, the Learning Center is home to Library Services, the Writing Center, Student Academic Support Services, the Spoonholder Cafe, the Bud Day Center, the Mass Communications Department, and the Campus Safety and Security Office.

Many Morningside students use this building as a meeting spot for projects, as well as studying and gathering with friends. Study rooms throughout the building offer students privacy to work, and brand new renovations within the third floor will provide extra learning spaces with hands-on opportunities.

Lewis Hall was constructed in 1900 and is the second oldest building on campus. This all is home to many administrative offices, including those for Marketing and Communications, Business, the Registrar, Admissions, the Dean of Students, and the President.

Lewis Hall is also home to offices and classrooms for the Humanities Department, including the English and Modern Languages offices. Lewis Hall is also in the center of campus, making it accessible to all students, faculty, and staff.

Constructed in 1974, this building houses classrooms and offices for the Departments of Accounting and Business. The Robert M. Lincoln Center is home to the U.P.S. Auditorium, one of Morningside’s small auditoriums, as well as the business library, conference rooms, and the Center for Entrepreneurship Education. It is located on Peters Avenue, next to the Olsen Student Center.

The MacCollin Classroom Building is adjoined with the Eugene C. Eppley Fine Arts Building, and is often mistakenly referred to as Eppley. This building houses offices, classrooms, art studios, and practice rooms for choral and instrumental music, as well as the Music and Arts Departments. Student art is also often displayed within hallways and on walls throughout this building.

The James and Sharon Walker Science Center is comprised of the A.W. Jones Hall of Science and the Jacobsen Annex, built in 1948 and 1969 respectively, that was renovated in 2001. This building includes classrooms, labs, and offices for the Departments of Biology, Chemistry, Computer Science, Mathematics, and Psychology.