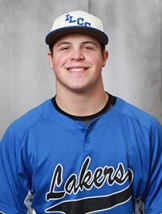 Rogers will have junior athletic eligibility after starting for the Lakers each of the past two seasons.

Rogers collected 50 hits in 170 at-bats for a .294 batting average and led Iowa Lakes with 15 doubles and 45 runs scored this past season. He was hit by a pitch a team-high 12 times. Rogers, one of only two players to start in all 52 of the Lakers’ contests, ranked second on the team with two home runs and 33 RBIs.

Rogers received second-team National Junior College Athletic Association (NJCAA) All-Region XI honors as a freshman when he had 44 hits in 120 at-bats to lead Iowa Lakes in hitting with a .367 batting average. Rogers also topped the Lakers with nine doubles to go along with two triples, one home run, and 28 RBIs.

Drent said he has been following Rogers’ career since he was a prep standout at Worthington High School, where he was a 2013 graduate.

“We were trying to recruit him out of high school, so we are really excited to get him now,” Drent said.

“We look for Blake to make an immediate impact,” Drent said. “He projects as a middle of the order hitter and his ability to catch and play first base fills our biggest recruiting needs.”

Rogers will join a Morningside team that posted a 35-18 record and finished third in the Great Plains Athletic Conference (GPAC) standings with an 11-9 league record during the 2015 campaign. The 35 victories gave the Mustangs five 30-win seasons in the last eight years.