Following the Footsteps of Bruce Kaji

Read this story and more in the Morningsider (Fall 2021 Issue)

Bruce Kaji may have only attended Morningside a short time after being incarcerated at the Manzanar Relocation Camp in the 1940s, but his story and commitment to building community have left a lasting impact.

Following the bombing of Pearl Harbor and under the guise of preventing espionage on American shores, President Franklin D. Roosevelt issued Executive Order 9066 in February 1942. Among other actions, the order established military zones in states that were known to have large populations of Japanese Americans, including California, Washington, and Oregon. This resulted in more than 120,000 individuals of Japanese ancestry being removed from their homes and forced into concentration camps.

While the Commission on Wartime Relocation and Internment of Civilians would conclude in 1983 that the actions were not justified by military necessity, but by “racial prejudice, wartime hysteria, and a failure of political leadership,” there was strong public support for the actions at the time they were issued. There were, however, U.S. citizens who disagreed with the internment of Japanese Americans and advocated on their behalf. One such group was the National Japanese American Student Relocation Council, which was established to allow Japanese American students to continue their education. 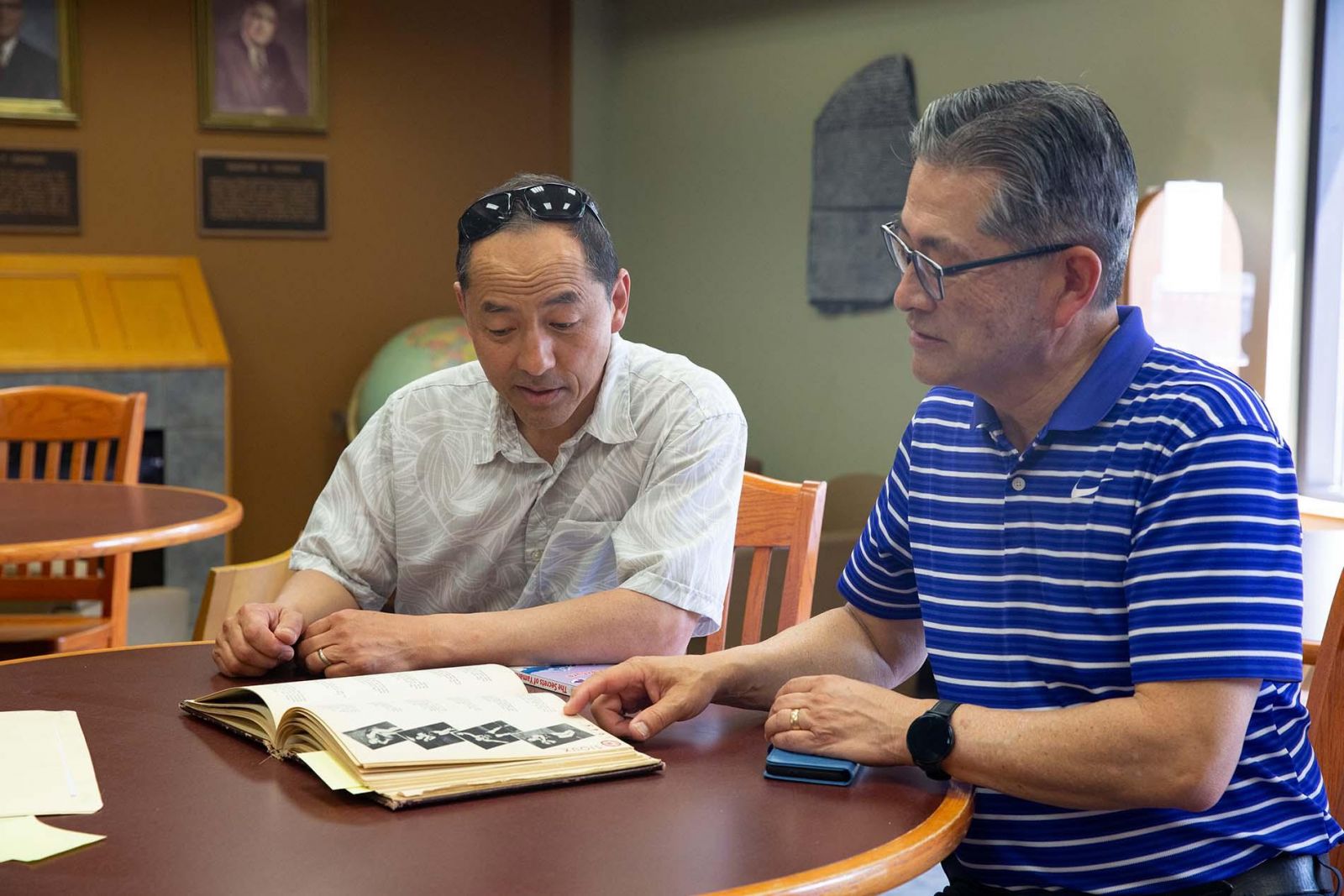 Morningside Library Director Adam Fullerton met with the Kajis to review information he was able to locate about their father in the archives.

Though the federal government initially opposed Morningside admitting Japanese American students because of a cadet training program that existed on campus, the campus persisted and at least a half-dozen students of Japanese ancestry from internment camps would attend Morningside during those years through a partnership with the Japanese American Relocation Council.

Bruce Kaji was one of the students. Though Bruce would only spend a very short time on campus, it was the start of his journey to becoming an extraordinary leader, community activist, connector, and family man.

A Look Back at Bruce Kaji’s Life

Teruo “Bruce” Kaji was born in California in 1926 to Umetaro and Katsu Kaji, who were Issei (first-generation) Japanese American immigrants. Bruce grew up in the Boyle Heights area of Los Angeles, where he gained an interest in both music and athletics through playing the trumpet and basketball. He was a high school student when World War II broke out and following the signing of Executive Order 9066, Bruce and his family were sent to the Manzanar Relocation Center, which was one of ten camps where the government incarcerated individuals of Japanese ancestry.

Bruce spent his sixteenth birthday aboard a dimly lit train taking him and his family to Manzanar War Relocation Center in the dusty scrublands below the east side of the Sierra Nevada. After spending two years attending Manzanar High School, he graduated and wanted to attend college. Morningside was the option he chose to pursue.

In his application, Bruce wrote, “…nothing much has influenced my decisions and plans for college. All of a sudden, during the junior year I was hit hard by the realization that high school was just the beginning of my life and one’s steady forward progress. I decided right then and there to embark on the field of medicine, a field which I think is most interesting and helpful in human society. Evacuation and camp life have been experiences which cannot be forgotten. They are forever imprinted in the pages of my memories. This portion of my life has brought me in contact with many people who I believe are 100% American. Why? Because they are not prejudiced. They treat everyone, no matter what race, color, or creed, as an equal. I have admired and respected their fair-mindedness and hope to acquire the same ideas of equality.”

The registry notes at Manzanar document that Bruce departed for Sioux City, Iowa, on Jan. 10, 1945. Upon his arrival, Bruce enrolled as a pre-med student because he envisioned following a path inspired from reading Sinclair Lewis’ novel Arrowsmith, which portrays the science-minded Martin Arrowsmith making his way from a small Midwestern town to rise to renown as a medical researcher. He also played for the Morningside Maroons men’s basketball team and was dubbed in the 1945 yearbook as being “without a doubt the best ball handler on the Maroon team.”

His stay at Morningside was short-lived, though, as he was drafted for the war within weeks of his arrival.

“Though my father was only at Morningside a short time, he found the campus and Sioux City to be a friendly place where he didn’t experience some of the discrimination that he had elsewhere,” said his son Jon, founder and president of Kaji & Associates in Gardena, Calif.

During his service in the U.S. Army, Bruce qualified to attend the Military Intelligence Service training program at Fort Snelling, Minn. He served as a Japanese-language interpreter for the War Crimes Tribunal in both Tokyo and Manila. While his family says Bruce didn’t often speak about the darker aspects of his experiences, he confided that the captured Japanese soldiers he would interview expected to be killed and were often shaking with fear. As a small gesture of kindness, Bruce would give them a cigarette to help them relax and allay their fears.

“Like so many in the Greatest Generation, our dad chose to keep some secrets. He wanted to build a better world and not focus on the dark side of the things that he experienced,” noted Jon.

Following the war, Bruce returned to Los Angeles and attended the University of Southern California. There, he earned a degree in accounting and a teaching endorsement. It was at that time he also chose to legally change his name to “Bruce” because of the number of people who would mispronounce his given name. He chose Bruce because of his fondness for Bruce Wayne of the Batman comic book series.

In 1954, Bruce married Frances Tashiro, whose father founded the Japanese Hospital of Los Angeles in 1927. During the 50s and 60s, Bruce established one of the first Japanese American-owned banks in the country. He also began what would become a lifetime of community- and relationship-building. He used his ties throughout Los Angeles and the local Japanese community to bring people together and work toward the betterment of the world, especially his local community. His sons reflect that Bruce loved to become part of boards and nonprofit groups, and he relished opportunities to network and break bread with individuals from all walks of life.

“My father had a very good sense of audience. He used that to bring people together and build community. He channeled his life into ensuring future generations wouldn’t forget about injustices, but he was also committed to finding common ground, breaking down barriers, and finding shared experiences,” said his son Dr. Troy Kaji, who is associate chief medical informatics officer with Contra Costa Regional Medical Center & Health Centers in Martinez, Calif.

A pivotal experience in Bruce’s life came when he helped establish the Little Tokyo Redevelopment Association in 1963. The city had begun an effort to seize an entire block of Little Tokyo to build a new police headquarters through eminent domain. Using his gift for building relationships and community, Bruce and the association were able to help spur economic development in the area and ensure Little Tokyo’s survival.

Bruce also put his talents to use to establish the Japanese American National Museum in Little Tokyo. He helped organize the lease of 4.5 acres to serve as the site in 1992. Today, the museum is a thriving national repository of Japanese American history that has a mission to “promote understanding and appreciation of America’s ethnic and cultural diversity by sharing the Japanese American experience.”

For his work, Bruce was recognized with the museum’s Legacy Award for his vision and leadership in May 2017. His lifetime of experience and work also led him to be the recipient of the Congressional Gold Medal in 2011, as well as the recipient of the Order of the Rising Sun, Gold and Silver Rays, from the Japanese government in 1997. Bruce Kaji continued While all the decorations of service were certainly great honors, his sons note that Bruce valued his family above all else, and he lived by a philosophy that small gestures and simple kindnesses often had the ability to make the biggest impact. 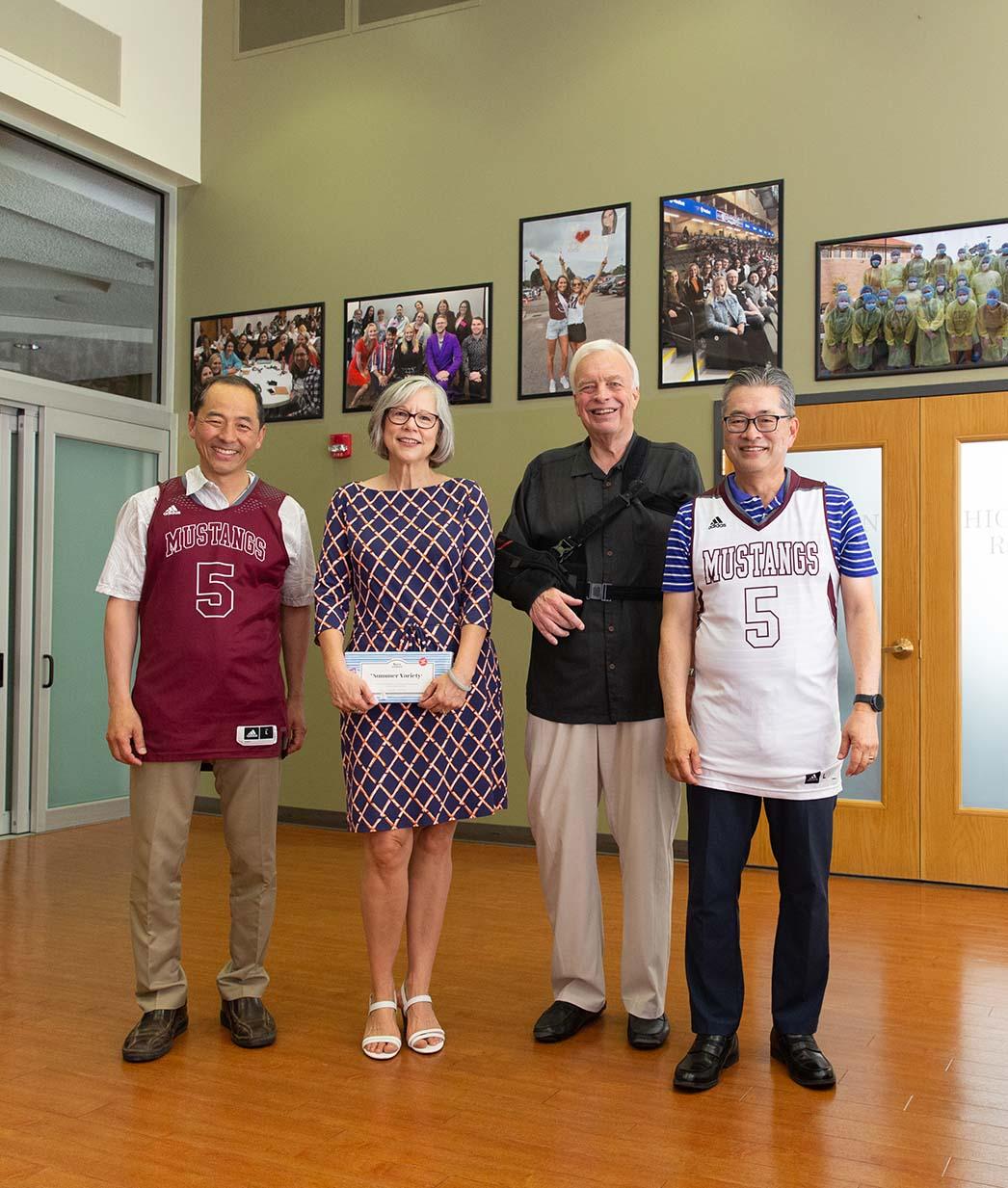 John and Robin Reynders presented Jon and Troy with Morningside basketball jerseys with the number thought to be their father's.

“My father was very good at thanking people – especially those working behind the scenes - and he was always willing to help out if he was able. Whether it was supporting a local business or helping someone running for office, he understood that the fabric of a community was made stronger by those small gestures of support,” said Troy.

Bruce passed away on Oct. 26, 2017, just a year after his wife’s passing, leaving behind the legacy of a family that he cherished: Jon; a daughter, Miki; Troy; and eight grandchildren. While Bruce never returned to Morningside after his short stay, he always mentioned attending Morningside as a fond memory. Seventy-six years later, his sons journeyed from California to Sioux City and the Midwest to trod in the places their father had once been.

A Visit to Remember

Making the trip to the Midwest was important to both Jon and Troy to try to imagine their father’s experiences. Instead of rail car, they first flew to Minneapolis to visit friends and see Fort Snelling, the site of the Military Intelligence Service Language School, then traveled by car to Sioux City.

During their visit, the brothers toured Siouxland, visited the Morningside campus, shot a few baskets in Allee Gym, and spent time with some Morningside staff members who ensured that Jon and Troy had the opportunity to be in some of the places their dad lived, worked, learned, and served.

One thing both brothers noted during their visit was how important it was to make the trek and physically follow their father’s footsteps to help gain a new understanding of his life.

“Seeing the places our dad spent time makes everything more real. To stand in places he might have stood after Manzanar and think about how that might have helped him reestablish himself as a normal person really adds a different dimension to things,” said Jon. “It’s so important to keep stories like this alive and add new understanding to them, because they otherwise stay hidden or become lost.”

Thanks to his family’s commitment to sharing his story and following his footsteps, Bruce Kaji’s legacy and his connection to Morningside has been renewed to share with a new generation.