Natasha Hongsermeier-Graves ‘17 on the healing power of music

Read this story and more in the Morningsider (2020 Fall Issue)

“A background in music has been useful in medical school because I understand how to listen,” says Natasha Hongsermeier-Graves ‘17. The soon-to-be Dr. Hongsermeier- Graves began her musical endeavors with the piano in 4th grade before finding her primary instrument, the flute, in 5th grade. She later added the piccolo and guitar to her arsenal and continued taking piano and flute lessons throughout college in addition to being involved with the Morningside Master Chorale ensemble.

When practicing her instruments, Natasha listens objectively to her own playing and makes modifications based on what she hears. She follows a similar process with patients, listening to their story and creating a plan to work toward a healthier life. Practicing and performing music has personal benefits as well. “Music in medical school has been my self- administered vaccine for burnout,” she adds. “Playing with the Nebraska Medical Orchestra and Musicians for Healing is how I stay human and re-energize.”

Natasha’s journey into medicine started as a child interested in a variety of science careers. She bounced between wanting to be a paleontologist, astronaut, and equine geneticist before discovering medicine by watching her dad perform veterinary duties on their farm. She recalls a specific instance when she was around 10 years old where her dad had to sew up an injured calf. Natasha held the layers of tissue together so her dad could suture the wound, and the experience inspired her to pursue a career in medicine. She struggled between becoming a veterinarian or doctor late into her college career before ultimately choosing to focus on human patients.

Natasha will graduate from the University of Nebraska Medical Center with a Master of Public Health in addition to her M.D. in 2023. Earning multiple degrees is nothing new for the 2017 Morningside alumna who earned a Bachelor of Science in Biology and a Bachelor of Arts each in Chemistry and Music. While her tendency to be interested in pretty much everything can sometimes make choices difficult, it was because of this that she chose Morningside. “I knew I was interested in science and music, and Morningside was a place where I could engage in both equally without having to choose one or the other.” 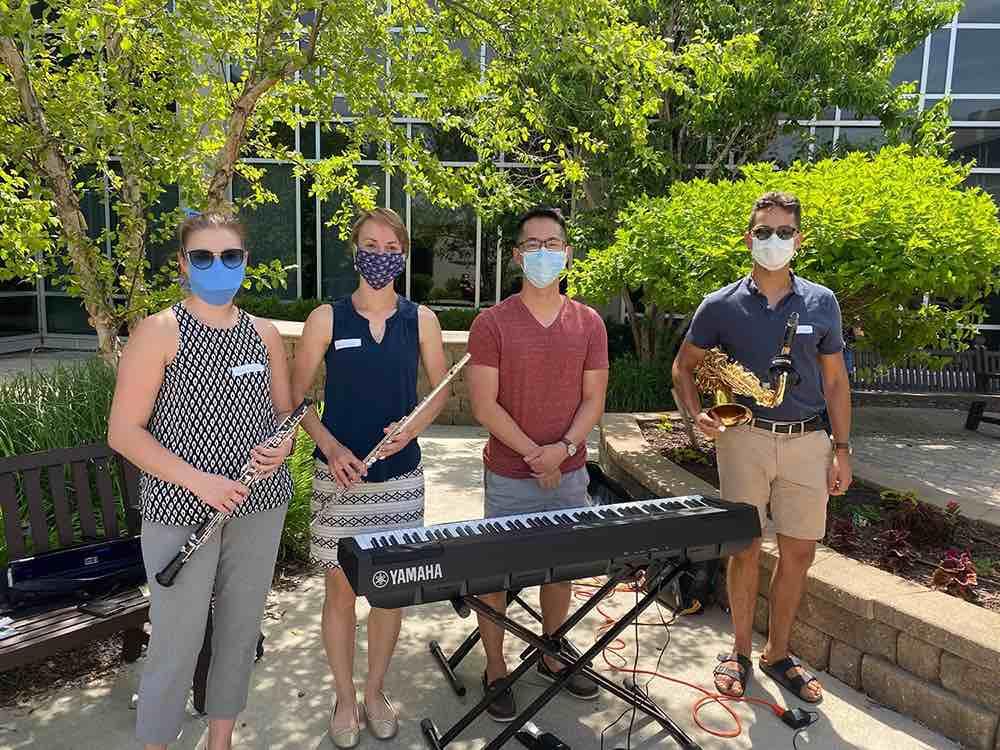 Natasha’s flute teacher at Morningside, Diane Gross, opened her eyes to the healing power of music. While Diane was diagnosed with leiomyosarcoma, a rare cancer affecting smooth muscle tissue, in 2004, it did not stop her from playing and teaching. Musicians for Healing, a group of musicians now led by Natasha that shares music in healthcare settings, was Diane’s idea. After Diane passed away in 2019, Natasha saw Musicians for Healing as a way to keep her legacy alive and serve others through music the way Diane had taught her.

“As a pre-medical student, Musicians for Healing has allowed me to observe the benefits of integrating care in order to treat the whole patient,” Natasha writes on the Musicians for Healing website. She goes on to discuss how medical professionals have reported decreased stress and anxiety not only in their patients but also in themselves, aiding healthcare practitioners in the management of their emotional well-being while providing better care. By exploring a holistic approach that examines the relationship between the body and brain to utilize a clinically relevant understanding of music therapy, while imparting the value of service through music, Natasha believes her experience with Musicians for Healing will help her become a better doctor.

“Music brings comfort to patients in a way that words cannot,” she muses. “Diane gave me the idea of playing for patients as a way to not only engage in community service through music but also to practice performing and break down the ‘fourth wall’ as a musician. Losing her was extremely hard for me. She was an incredible mentor and friend.”

Musicians for Healing continues to shine a light on the power of music to comfort and inspire patients in healthcare settings, and this light has not been dimmed by the COVID-19 pandemic as the group established themselves in the Omaha area through a series of socially distanced outdoor performances.

During a time where many patients and long-term care facility residents were indefinitely separated from their family and friends to mitigate the risk of transmission, the music performed by members of Musicians for Healing brought both residents and staff to tears on more than one occasion. Natasha says staff also came up to her multiple times and shared how much it meant to them and the residents to hear them play after dealing with the challenges posed by COVID-19.

Speaking of challenges due to the pandemic, Natasha, like many students, faced uncertainty in her academic schedule. Having recently taken the first part of the United States Medical Licensing Examination, she was slated to begin clinical rotations in March and was looking forward to applying what she’d learned in the classroom to real patients. Instead, rotations were postponed until late June and two of her courses moved online. Additionally, she’s found herself pursuing a medical career during a time where science has become political, a development she calls disappointing. She encourages people to take coronavirus seriously and consider how they can protect themselves and others. “Science is non-partisan,” she says. “I wear my mask for you, and I need you to wear your mask for me. Practice social distancing. Wash your hands. This is a pandemic in real life.” 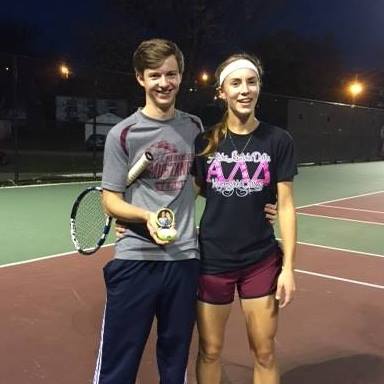 As she prepares to graduate from medical school, Natasha reflects on the impact of her Morningside experience. Her favorite memory is when her now-husband Danny Graves ‘18 proposed to her on the tennis courts. Both she and her husband played for the Morningside tennis team, and he popped the question using a ring box disguised as a tennis ball.

In addition to meeting her husband, she recalls over a dozen people who impacted her in life-changing ways at Morningside – the most inspiring being Diane. By the time their paths crossed, Diane had outlived her cancer diagnosis by over a decade. One of her lungs had been removed due to metastasis, yet her flute playing remained as beautiful as ever. “Diane understood better than anyone the connection between medicine and music,” Natasha says. “Her life lessons will always remind me of the importance of understanding patients not just as a doctor, but as a human being.”

In Her Own Words: Read A Reflection on Diane Gross by Natasha Hongsermeier-Graves