The annual Omicron Delta Kappa (ODK) Honors Convocation was held at Morningside University on April 13, 2022, during which several students and employees were recognized for their academic, co-curricular, athletic, and professional achievements.

The Tommeraasen Award of Excellence for an outstanding campus organization went to the Morningside Student Nurses Association. The Student Government Event of the Year was awarded to Bake Sale for Ukraine held by the Pre-Professional Health Club, Sustainable Environment Organization, and Beta Beta Beta Biology Honors Society.

The ODK Sophomore Cup, an honor that annually recognizes a sophomore for outstanding leadership and campus participation, was awarded to Jordyn Kemp of Hopkinton, Iowa. Thomas Moss of North Platte, Neb., was the recipient of the ODK Freshman Cup, which recognizes excellence in leadership and participation in a student’s first year on campus. 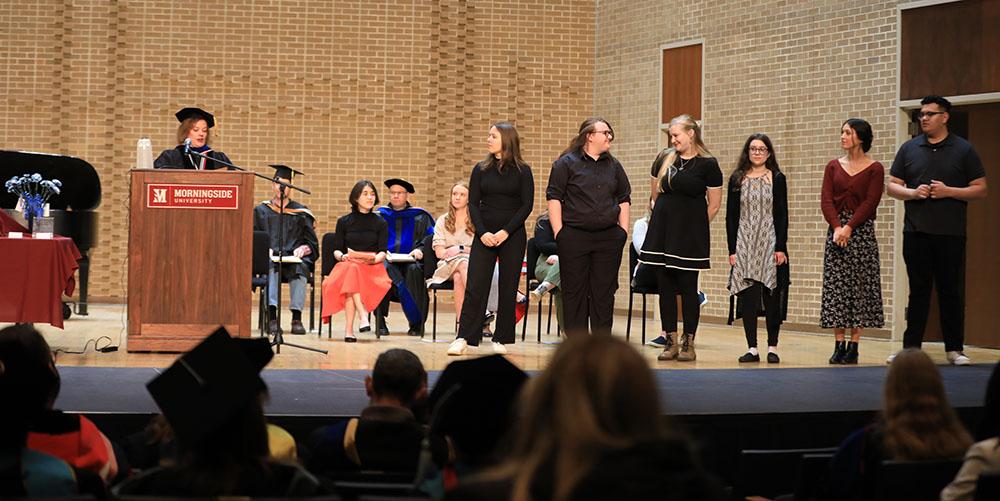 Students in the English program receiving awards at the 2022 ODK Honors Convocation at Morningside.

The Robert “Bob” Miller Academic Student-Athlete of the Year Award is presented by the Miller family in his memory and is awarded to a senior female and male student-athlete who has achieved outstanding academic and athletic performances while at Morningside. Makayla Mozak of Sioux City and James Spicer of Rock Springs, Wyo. were this year’s recipients. Mozak is on the cheer squad and Spicer is on the men’s swimming team.

The following departmental awards were presented for outstanding achievement by students in the corresponding program or department: