Sioux City, IA – Morningside College’s School of Visual and Performing Arts announced seven distinguished arts faculty and alumni as honorees for its annual Culmination of Distinguished Achievement (CODA) Legacy Award. In light of the changes to Homecoming 2020 at Morningside due to COVID-19, the recipients will receive their awards at Homecoming 2021. The 2020 honorees are Lucy Buhler '56, Russel Clifford '68, Tyrone Greive '65, Kristine Jepson '84, John Kolbo '78, Gail Royer '56, and Gary Slechta '64. 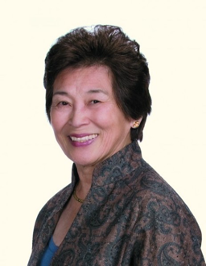 Lucy Yoshioka Buhler graduated from Morningside College in 1956. Hawaiian-born and of Japanese descent, she came to Morningside College on a scholarship to study music education. While here, she often presented her native hula dance in its true, almost sacred sense, for area groups. Upon graduation, Lucy taught in Hartley, IA, for a year, before transitioning to Marcus, IA, to teach vocal music. According to those who sang under her tutelage, Lucy was one of those rare individuals, a true Master Teacher.

She went on to the University of South Dakota to earn her Master of Music degree. There she met her future husband, Walter Buhler, a graduate student in the Business School. Walt went on to work for Arthur Anderson, which relocated Lucy and her family to different cities around the world.

Through teaching, music lessons, and serving on numerous committees and boards, Lucy inspired the love of music and the fine arts in Minneapolis, Denver, Tulsa, Rio de Janeiro, and Hong Kong.

Two of Lucy’s greatest passions are music and Morningside College. Lucy and her family established an annual music scholarship and funded the Buhler Outdoor Performance Center, which is home to the Betty Ling Tsang Fine Art Series. 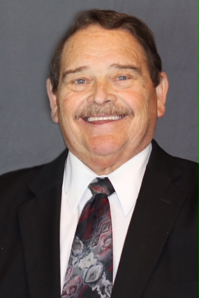 Russel Clifford began teaching with provisional certification while completing his student teaching requirements from Morningside College in Fall 1968. A lifelong musician, Russ began playing the organ for his country church, in rural Milford, Iowa, at the age of eleven. Over the years, he has directed, sung in, and accompanied dozens of community and church choirs.

From musicals, show choirs, and contests to private voice lessons and madrigals, which he founded at both Bishop Heelan Catholic High School and Sioux City West High School, Clifford has been a fixture in Siouxland’s choral music scene for over fifty years. Russ has conducted multiple conference and district festivals and continues to serve as a certified adjudicator for the state music associations in Iowa, Nebraska, and South Dakota.

Clifford has former students who have gone on to sing professionally from Broadway, to the Metropolitan Opera and beyond. In a career that has spanned six decades, Russ would say that his greatest contribution as an educator has been to have provided a welcoming, accepting, supportive environment where thousands of students, regardless of background and ability, have found a safe place to belong. 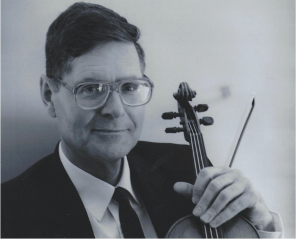 A 1965 graduate of Morningside College, Tyrone Greive’s career as a professor of music, performing violinist, and researcher has spanned well over 50 years. Born and raised in Sioux City, Iowa, and winning his first college-level teaching position a year before earning his undergraduate degree, he taught at Augustana College (Sioux Falls, SD) and regularly performed as a founding member of the Augustana Trio from 1964 to 1975. After teaching at Stephen F. Austin State University in Texas from 1977 to 1979, from 1979 he was a professor of violin at the University of Wisconsin-Madison for 34 years. Retiring from the university as an emeritus professor in 2013, his many former students perform nationally and internationally in orchestras, chamber ensembles, and a variety of other non-classical settings, teach in colleges, universities, conservatories, other music schools, elementary and secondary schools, and private studios and are active as conductors and leaders in more broadly reaching educational endeavors. Many of those who have chosen other professions continue to play and/or strongly support music and the arts in their communities.

Greive has been equally active as a performer. Beginning with the Sioux Falls Symphony in 1964-68 and 1970-75, he was the concertmaster of the Lakeside (OH) Summer Symphony in 1964-1965, the Black Hills Chamber Orchestra in 1970-1973, the Longview (TX) Symphony Orchestra in 1977-79, the Shreveport (LA) Summer Music Festival in 1979-86, 1988, 2003-14, the Madison (WI) Symphony Orchestra in 1990-2010 and other orchestras. His violin performances have included solo recitals and appearances with orchestras and chamber music groups throughout the United States. In terms of programming, he has blended relatively little-known but deserving and appealing repertoire with standard masterworks.

Greive also has internationally published performance editions, arrangements, articles on string pedagogy and repertoire, reviews, contributions to books, and CD recordings. Reflecting his long-time, extensive research of Polish violin music since joining the faculty in Madison, he received multiple research grants and made four trips to Poland, with the first coinciding with the fall of the Berlin Wall in 1989. Capped by an all-Polish-music recital at the Kosciuszko Foundation in New York City in March 2003, he has devoted numerous performances and presentations as well as large numbers of his over 100 publications to Polish music and the history of the violin in Poland. He continues to publish his research and be internationally consulted for his expertise in Polish repertoire.

Greive holds music degrees from Morningside College, Carnegie-Mellon University, and the University of Michigan, where his principal violin teachers were Leo Kucinski, Sidney Harth, and Angel Reyes, respectively. He also attended the Meadowmount School of Music, where he studied violin with Margaret Pardee, and the Aspen Music Festival, where he studied chamber music with Claus Adam, Robert Mann, and Lilian Fuchs. 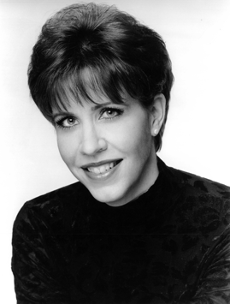 Kristine Jepson was an internationally acclaimed American mezzo-soprano and 1984 graduate of Morningside College. A 2017 article in Opera News described her as “a mezzo-soprano of rare intelligence, integrity, and courage.”

A native of Onawa, Iowa, Kristine debuted with the Metropolitan Opera in New York City in 1994, performing 108 principal role performances with the company and on tour. Throughout her career, Jepson maintained repeated engagements with international companies such as La Scala, Covent Garden, Teatro Carlo Felice, La Monnaie, Dresden Semperoper, the Hamburg State Opera, and the Bavarian State Opera, both Paris opera houses, and many others.

Jepson was especially admired for her “refined impassioned singing in the operas of Mozart and Richard Strauss.” (Opera News, July 2017) Notable roles at the Metropolitan Opera include Mercédes in Bizet’s Carmen (1996), Ascanio in Benvenuto Cellini (2003), Siébel in Faust (2005). Among Jepson’s other Met roles were Octavian in Strauss’ Der Rosenkavalier, Cherubino in Mozart’s The Marriage of Figaro, and Stéphano in Berlioz’ Roméo et Juliette.

During her time with the San Francisco Opera, Jepson premiered the role of Kitty Oppenheimer in the world premiere of John Adams’ Doctor Atomic (2005) and sang Sister Helen in the first run of Dead Man Walking (2000). Throughout her career, she also performed with many other prominent North American companies including the Santa Fe Opera, Seattle Opera, Pittsburgh Opera, Cincinnati Opera, Canadian Opera Company, Vancouver Opera Company, New York City Opera, and Opera Theatre of Saint Louis.

Jepson completed her Master’s Degree in Music Performance at Indiana University in 1987 and passed away in 2017 at age 54. 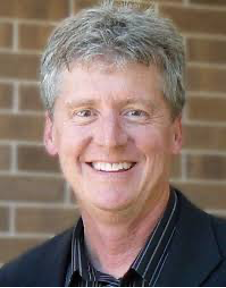 John Kolbo graduated from Morningside College in 1978 with a Bachelor’s Degree in Art and Music. He spent his early career working for local advertising and commercial design firms and soon became sought out for his creativity and technical understanding of advertising media.

As the owner of Phillips Marketing Associates, he decided to make the transition to computer-based design, at the time a large investment. The move paid off and allowed his company, located on Sioux City’s West Side, to provide design work and promotional products to many of Siouxland’s most established brands. This small business experience, combined with his love of typography, illustration, and art history, served his students well when he began to instruct.

He was invited to the Morningside faculty in 1999 and spent his career at Morningside recruiting, inspiring, encouraging, and mentoring young adults into portfolio-equipped professionals. At Meet the Pro’s, an annual gathering of design firms in Omaha, NE, numerous Morningside students would present their work and make connections to set them up for jobs after college. Kolbo’s strong emphasis on the fundamentals of design, critical thinking, and hard work, helped to grow the Morningside Graphic Design program to what it is today. In 2019, Kolbo received the Lucille and Charles Wert Award for Faculty Excellence.

John and his wife, Suzanne, met while studying at Morningside and will soon celebrate 44 years of marriage. Suzanne earned her teaching degree from Morningside in 2015 and teaches art at North Middle School. Their children, Aaron, Adrian, Adam, and Annika, all received degrees or studied at Morningside College, and they look forward to seeing the next generation of Kolbos on campus. 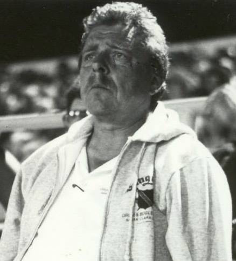 Gail Royer was the founder and executive director of the Santa Clara Vanguard Drum and Bugle Corps of Santa Clara, CA, and a 1956 graduate of Morningside College.

A native of Gowrie, Iowa, Royer evolved the Santa Clara Vanguard into the single-most influential drum corps of the 1970s, pushing the boundaries of the music and visual captions. Santa Clara Vanguard placed first at DCI World Championships in 1973, 1974, 1978, 1981, and 1989, earning recognition as the World Drum Corps International (DCI) Hall of Fame junior corps of the decade. The corps never placed lower than third in the first eight World Championship appearances. Royer led the Vanguard until his retirement in 1992, passing away in 1993.

A former California elementary school music teacher, Gail was a charter member of the Drum Corps International (DCI), established in 1972, and served as one of DCI’s first chairmen. 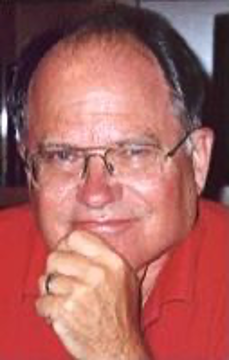 Gary Slechta has been a free-lance trumpet player, arranger, orchestrator, and publisher in Austin, Texas, since 1983. He was a long-time member of the Austin Symphony, the Austin Ballet Orchestra, the Capital of Texas Brass Quintet, the Riverbend Brass Quintet, Fable Brass Quintet, and various jazz, blues, and salsa bands. He has been active in the Austin studios and is heard on many national radio and television jingles (Austin City Limits) and has performed on over 80 albums and soundtracks.

Slechta holds music degrees from two Iowa institutions, Morningside College in Sioux City (1964 graduate), and Drake University in Des Moines. Following eight years of directing bands in the public schools, he taught trumpet, bands, and conducting at Morningside College from 1971-1982. There he founded and hosted the Morningside College Jazz Festival, which remains a prominent fixture within the region to this day. He was elected to the Iowa Jazz Educators Hall of Fame in April of 2002.

From symphonies to salsa, Slechta scores music in all styles and includes orchestrations for the Sony/Miramax film “Once Upon a Time in Mexico,” and PBS television specials. His works are in the catalogs of six publishers, including Shawnee Press and Southern Music. Many of his ensemble arrangements and CDs for Brass Quintet, Trombone Ensembles, Tuba Quartet, and Woodwind Quintet are available through his publishing company, “Select-a-Press,” at www.selectapress.com.

The Morningside College School of Visual and Performing Arts CODA Legacy Award is an annual award bestowed upon outstanding music, theatre, and arts alumni and faculty nominated by their peers. The School of Visual and Performing Arts is proud to offer opportunities for Morningside students to experience the fine arts on campus, regardless of major. With four choral ensembles, six instrumental groups, multiple art shows, and countless visiting performers and artists, the arts are alive and well at Morningside.