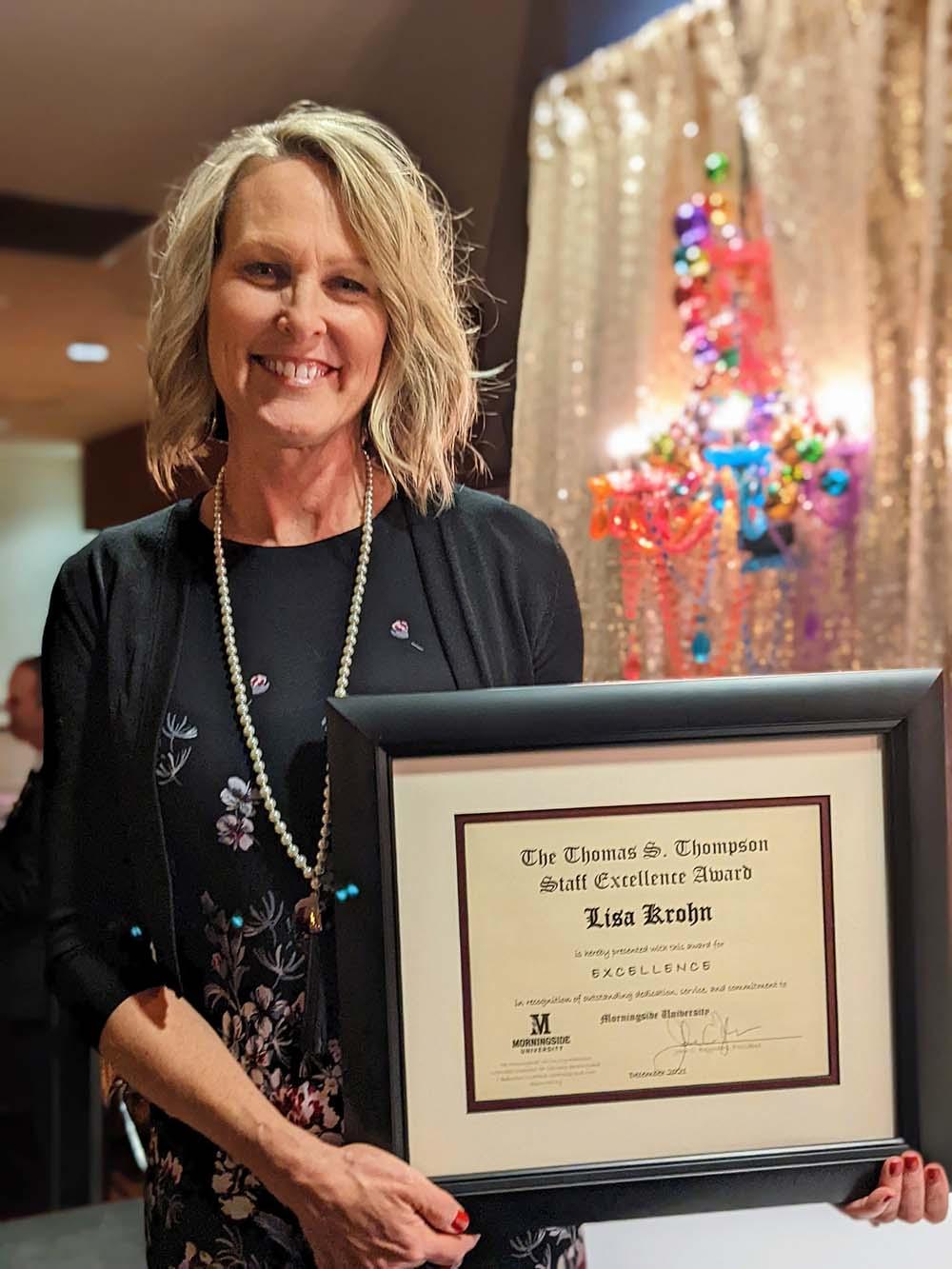 Lisa KrohnAs the administrative assistant to the President, Lisa Krohn is one of the first people to welcome visitors and students to Morningside. As the person who is responsible for planning and scheduling on behalf of the President’s office, Lisa is acutely aware of nearly everything happening on campus and is adept at handling good and sensitive news with care. In his remarks, Morningside University President John Reynders noted that Lisa is loyal, trustworthy, and a source of support. “On a personal note, I owe this woman a huge debt of gratitude,” said Reynders. “She has been essential to keeping me organized and on schedule all these years.” 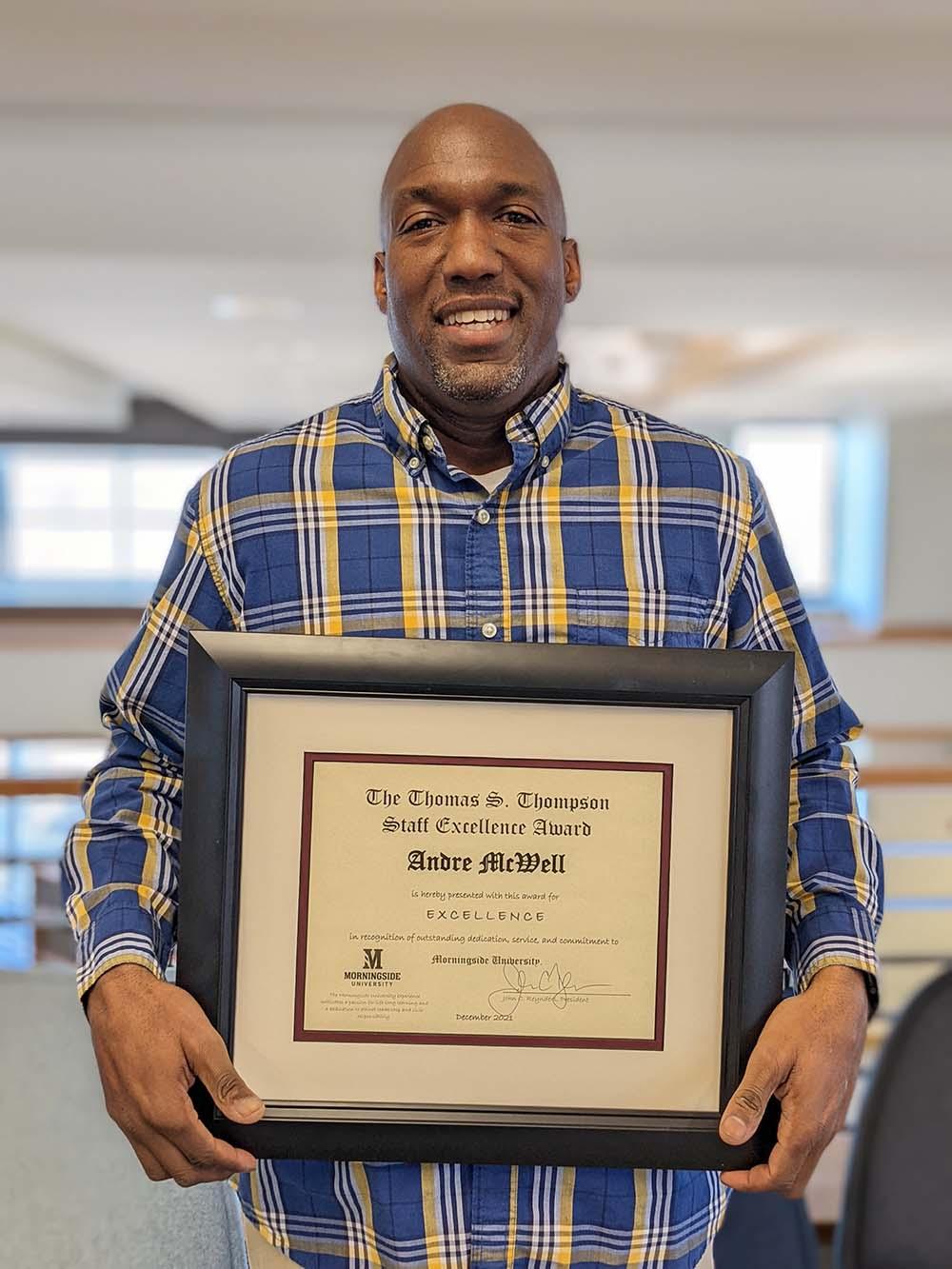 André McWellAndré McWell has served as a positive role model for Morningside students both in his role as the director of persistence and diversity and as an assistant coach for track and field. An excellent listener who values personal responsibility, André's work in advancing diversity and inclusion at Morningside and maintaining a strong partnership between Morningside and the Nicholas Academic Center in Santa Ana, Calif. has been crucial to student success at Morningside. 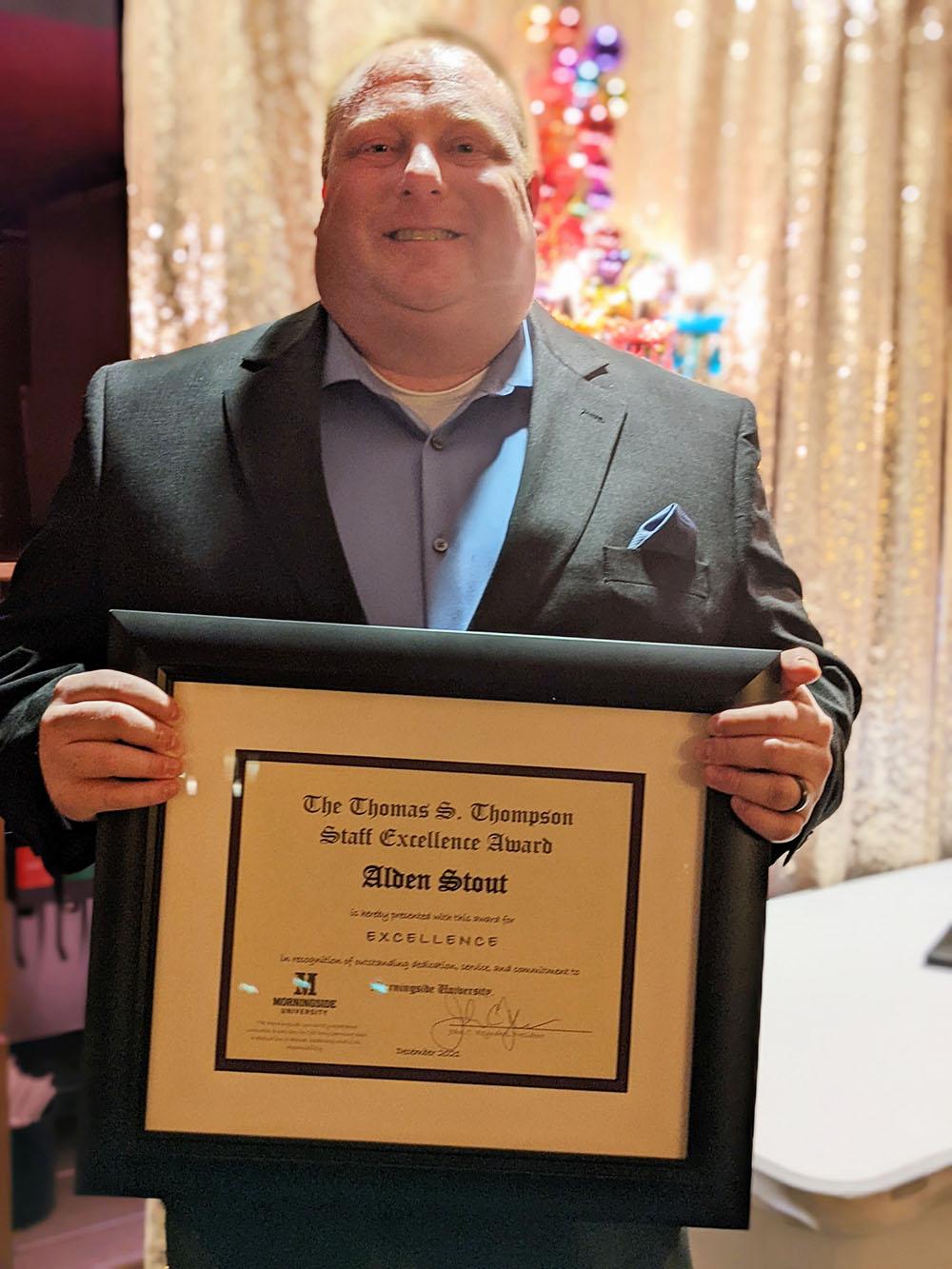 Alden StoutIn his role as the associate vice president of academic affairs, Alden Stout navigated a variety of complex topics and policies throughout the pandemic as a liaison and advocate for faculty, staff, and students. Additionally, Alden led four different grant teams at Morningside to be awarded grants totaling almost $4 million, and he has been critical in leading both the Higher Learning Commission Steering Committee and the Esther Mackintosh Humanities Scholar of the University search. 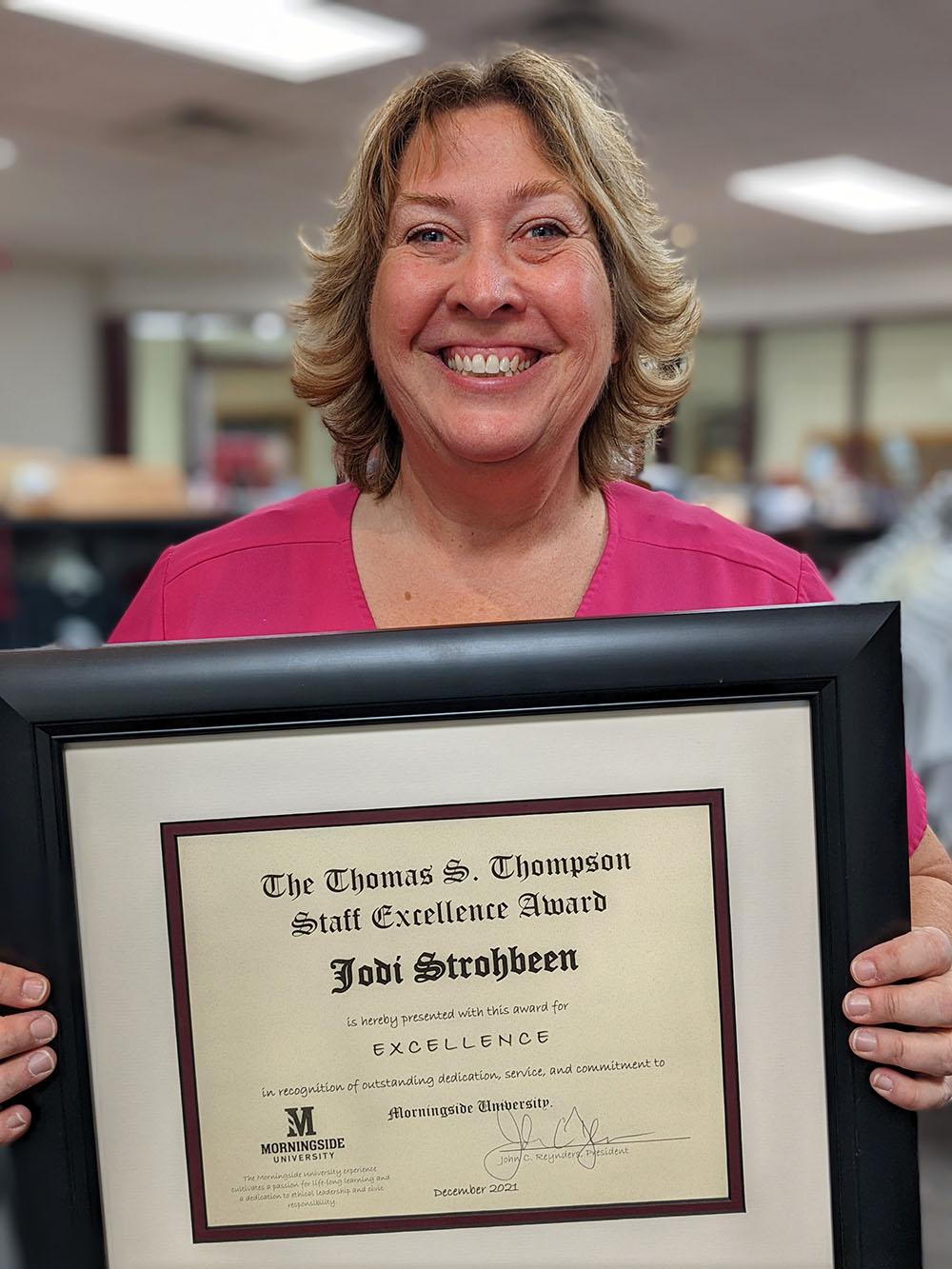 Jodi Strohbeen“It is evident that her love for Morningside is deep, and she takes her role as an ambassador for Morningside seriously,” said one of the nominators for Jodi Strohbeen, director of the Morningside bookstore. Upon her arrival at Morningside and in the years since, Jodi has taken the initiative to rethink business models, create a new social media presence for the bookstore, continue to find ways to innovate throughout COVID-19, and has driven hundreds of miles to make sure Morningside is represented at events both near and far. 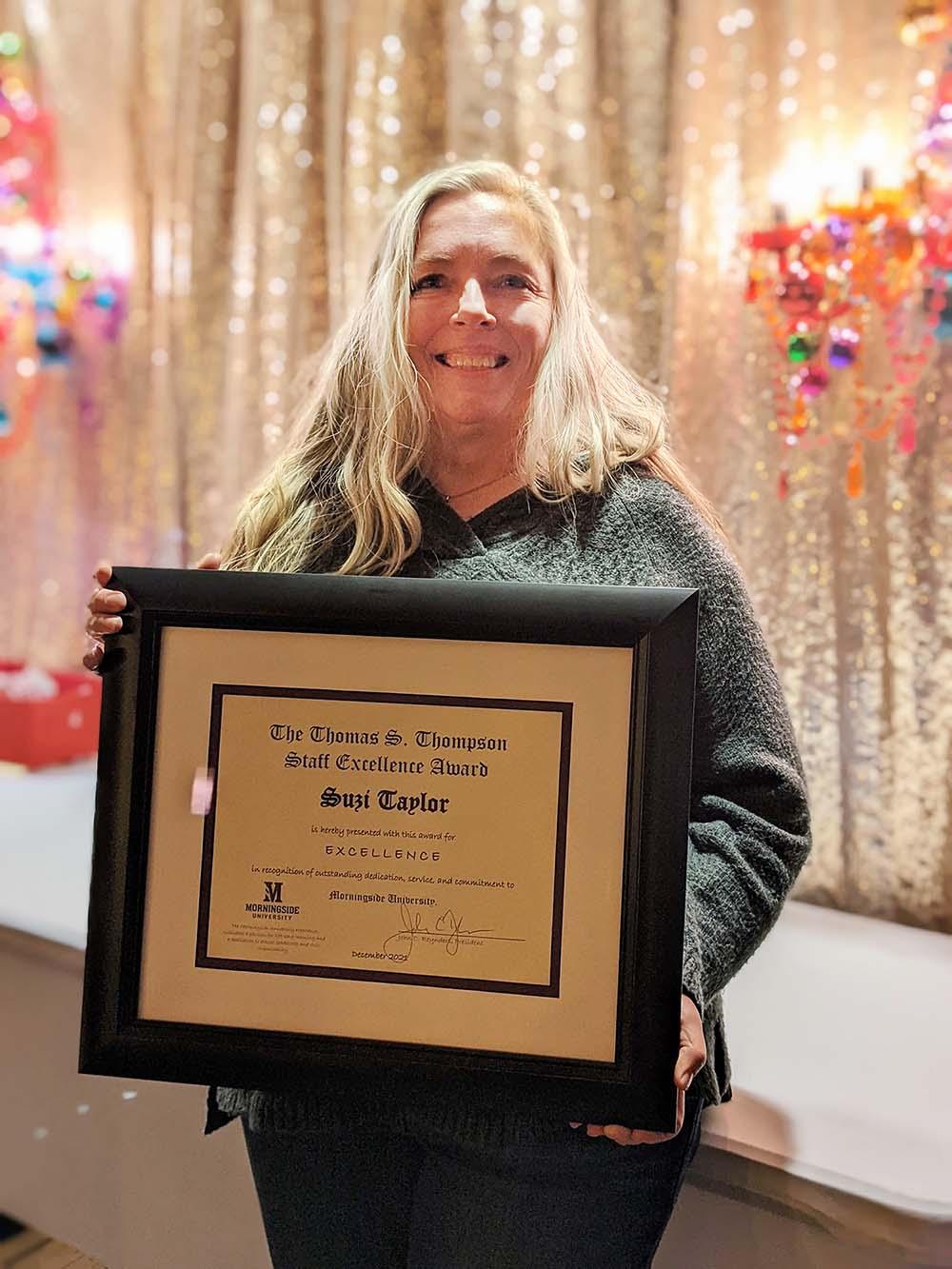 Suzi TaylorAssistant custodial manager Suzi Taylor came to Morningside in 2007 and has been a dedicated employee throughout her tenure. Described as a self-starter who is personable and mindful about time management, Suzi demonstrated outstanding leadership in her role, especially throughout the COVID-19 pandemic. “She’s hard-working, conscientious, and gives attention to detail. She’s very thorough and does a fabulous job wherever she goes on campus,” Suzi’s nominator shared. “She is quick to respond to requests, and is always cheerful, dedicated to her job, and committed to doing the task right.” 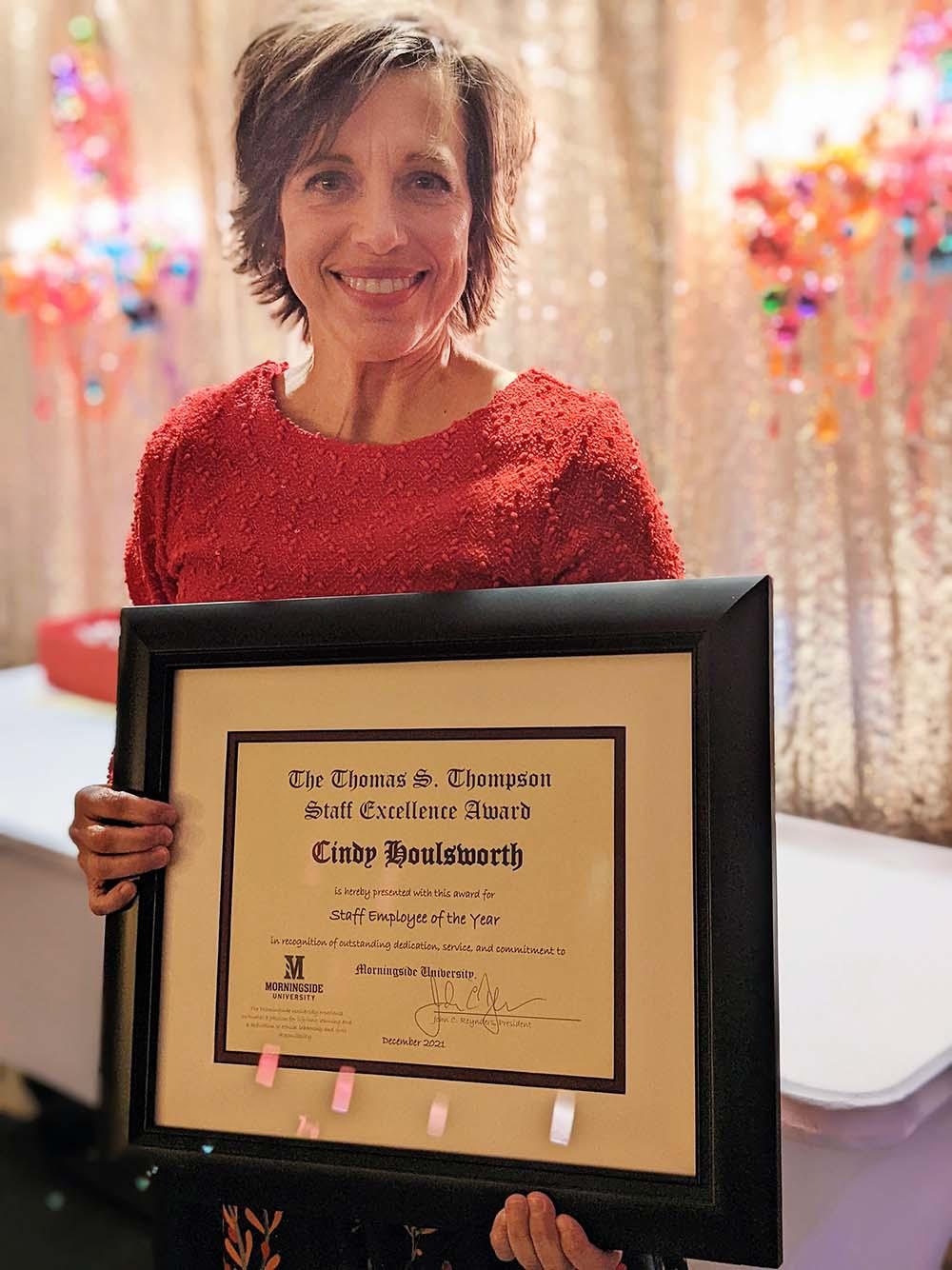 Cindy HoulsworthWhile all employees at Morningside found their jobs evolving due to COVID-19, few people experienced as much constant change as campus visit coordinator and employee of the year Cindy Houlsworth. During a time where Morningside had to change every aspect of the campus visit process, Cindy rose to the challenge and continued to be detail-oriented, kind, and an excellent communicator. “There is no question that her work helped result in yet another strong freshman class,” said President Reynders.

Award recipients each receive a $4,000 bonus and the employee of the year receives $5,000. Recipients are selected annually based on their demonstration of outstanding dedication, service, and commitment to Morningside and its students. The Thompson Staff Awards are funded by an endowment established in memory of Thomas S. Thompson who served as president of Morningside from 1969 to 1978.