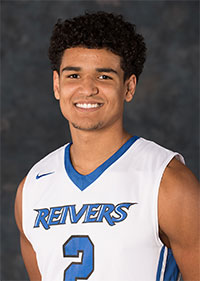 Harris will join the Mustangs with junior eligibility as a transfer from Iowa Western Community College, where he helped lead the Reivers to a 50-13 record over the past two seasons.

Harris averaged 3.3 points and 2.0 rebounds per game and dealt 31 assists in 31 contests this past season.

Harris is a 2015 graduate of Sioux City East High School, where he was a two-year starter. Harris earned third-team Class 4A all-state honors from the Iowa Newspaper Association (INA) in addition to first-team All-Missouri River Activities Conference (MRAC) honors and Sioux City Journal first-team All-Northwest Iowa and first-team All-Metro laurels following a senior season where he was East’s second leading scorer and rebounder with averages of 15.5 points and 6.5 rebounds per game. He dealt 61 assists for an average of 2.7 per game and topped the Black Raiders with 35 steals for a norm of 1.5 per game. Harris made 124 of 270 field goal attempts for 45.9 percent, 35 of 83 3-point field goal attempts for 42.2 percent and 74 of 92 free throw attempts for 80.4 percent.

Morningside posted a 21-10 record during the 2016-17 season for its seventh 20-win season in the last 13 years. The Mustangs, who finished fifth in the Great Plains Athletic Conference (GPAC) standings with a 10-8 league mark, have won four GPAC championships and made five NAIA Division II National Tournament appearances during the Sykes era.