Fuchs is runner-up at ITA Regional 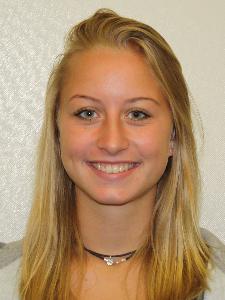 Morningside College’s Aileen Fuchs, a freshman from Munster, Germany, finished one victory shy of qualifying for the Intercollegiate Tennis Association (ITA) national tournament in the NAIA division when she lost in the singles final at this weekend’s ITA regional tournament in Lincoln, Neb.

Fuchs won four matches, all in straight sets, prior to the final and lost only 12 games along the way. She defeated Sydney Shields of Southwestern 6-1, 6-0 in the first round, defeated No. 7 seed Djurdjina Vorhac of Kansas Wesleyan 6-3, 6-0 in the second round, defeated Marcarena Bielsa of Missouri Valley 6-4, 6-2 in the quarterfinals, and defeated No. 3 seed Lillian Blasque of Missouri Valley 6-0, 6-2 in the semifinals.

The Mustangs’ Katie Hanson lost both of her matches in the singles competition.

Hanson and Cassie Stanek had a 2-1 record in the women’s doubles competition.

Morningside’s tennis teams also competed in the Nebraska Wesleyan Invitational on Friday and Saturday. The tournament was not completed due to a Friday rain delay that crowded Saturday’s schedule.

Morningside’s doubles teams of Fuchs and Tussing, Carlson and Jones, and Hongsermeier and Souissi all went 2-0.

The Mustangs’ doubles teams of Cadario and Renn, Betts and Akshay Krishna, and Adamson and Joe Kruger all went 2-1.