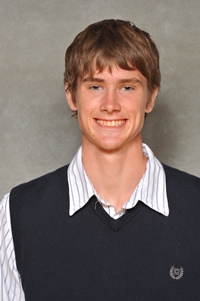 The Walker Award is one of the most prestigious awards in the NAIA and was created as part of the NAIA's association with Citizenship through Sports Alliance (CTSA). The CTSA is a group of 10 organizations from around the world of sports that seek to promote and recognize sportsmanship.

This award was created to honor Dr. LeRoy Walker, a former president of the NAIA and President Emeritus of the United States Olympic Committee. Walker served as president of the United States Olympic Committee through the 1996 Summer Games. The award recognizes a current student-athlete who has demonstrated outstanding academic achievement, campus and community leadership embracing the five core character values of the NAIA Champions of Character initiative, athletic achievement and future ambition.

Ehlers is a member  of the Mustangs' track & field and cross country teams.

“He was the last season's NAIA national runner-up in the 3000-meter steeplechase, but that achievement is rarely spoken of because Garret does not want to draw attention to himself," Nash said. "He wants to bring his team and community to a higher level instead of focusing on his own accomplishments.”

In his first three years at Morningside, Ehlers has been named a Capital One College Division Second Team Academic All-American and a NAIA-Daktronics Scholar-Athlete in both cross-country and track 7 field, in addition to multiple athletic honors, including being the men's individual champion at the 2013 GPAC Cross Country Championships.

Nash believes Ehlers' impact goes far beyond just the track and the classroom.

“Garret’s every day outlook is to help others and bring them to a higher level,” Nash said. "He spends a large portion of what little free time he does have volunteering in the community and leading a campus Bible Study.“He is the consummate team leader in athletics, service projects and academics.”