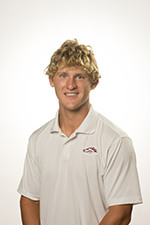 Keegan Bak, a senior from Hinton, Iowa, had the top scoring average for the Morningside College men’s golf team during the 2014-15 season.

Bak had the Mustangs’ low score of the season with a 71 in the Southeast Community College Spring Invitational on March 30 in York, Neb. He was the individual medalist with a 74 at the Northwestern College Invitational on April 21.

Alex O’Neill, a senior from Ponca, Neb., was next on the team with an overall scoring average of 80.3, including a 78.2-stroke average in the fall. O’Neill had one of the Mustangs’ top rounds of the season with a 73 at the Dakota Wesleyan University Palace City Classic on Sept. 12.

Morningside was the team champion at the Briar Cliff University Invitational on Oct. 7 for its top tournament finish of the 2014-15 campaign.