My mom used to tell me that when I grew up, I could be whatever I wanted. When she first told me that, I believed her. When I got a little older, I thought she was crazy. Today, I know that she was right.

Let me lay the story out for you. It was three days before the Fall 2019 semester was slated to start, and I walked into Leslie Werden’s office with an out-of-this-world idea. I wanted to start a new magazine. Kiosk had forever been on my mind, even throughout high school, but I wanted the entirety of the campus community to have the opportunity to be published. Kiosk is niche. That’s what makes it Kiosk. The Morningside Review was my crazy idea to publish every other type of writing that wasn’t creative. 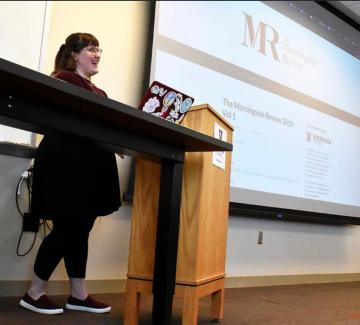 I had presented at the Palmer Research Symposium in April 2019, and I had won my oral session. As had many other students around me. Hours had gone into each research project that was presented, paper that was written, and poster that was created, but after Palmer all that work went nowhere. I thought that was a waste of student and Morningside potential.

We have all this great work here, so why not show it off?

Incomes the next seven months of hard work. Ally Hecht and I, along with a few other students, Leslie, and Steve, worked to create a brand-new magazine with a brand-new website.

It was some of the hardest work I have ever done. Collaboration and teamwork became incredibly important, in addition to time management and organization. I was also working two jobs, taking 18 credits, and leading Sigma Tau Delta. I was dead tired all the time (what college student isn’t, though?).

In the end, Morningside now has a new publication that is dedicated to the scholarly research of its students, alumni, and faculty. I like to think that it is a beautiful representation of who and what the college is, and it explores student potential to thrive.

The Morningside Review might be this “really cool resume booster” that is incredible to talk about with grad school recruiters (don’t get me wrong, it is) but more importantly is it a place for the voices of Morningside to stand forever. This college has changed my outlook on myself, my career, and my future while offering ample support for all of my “craziest dreams.”

Starting from scratch is not easy, but Morningside literally offers support from every single department. My favorite quote from The Morningside Review launch day was

“I don’t even know you, but I am so proud of what you have accomplished.”

We are family, and so starting from scratch doesn't have to be scary. In fact, it may just be the adventure of a lifetime.