I was eight years old when I told my mom that I wanted to study English when I went to college. Not if I went, but when. It wasn’t that surprising, really. I constantly had my nose in a book and regularly woke up an hour before school just so I could read.

When I actually began looking at colleges, which happened to be quite early on in my sophomore year of high school, the English and humanities programs at potential institutions were my main concern. I was also a pretty decent high school bowler, so my college choices were narrowed by my desire for a Liberal Arts school with a bowling program. Morningside ended up topping my list. I bounced back and forth between what I thought was my “dream college” and Morningside, but once I turned in my deposit I knew I had made the right choice.

By the end of my sophomore year, I had been a part of Alpha Lambda Delta, Sigma Tau Delta, KMSC 92.9, the Writing Center, The Collegian Reporter, the varsity bowling team, and the literary and art publication Kiosk. But I still had no idea what I wanted to be when I “grew up.” KMSC had allowed me to play around with the idea of being an on-air personality. I could be whoever I wanted while talking about whatever I wanted. Sigma Tau Delta proved to me that bookworms and wordsmiths were my type of people. Being a “nerd” had defined me my whole life, but I was finally able to see other people just like me. And, to top it all off, they were successful and happy. Though I found my people, I didn’t find what I wanted to do as a career. The Writing Center was where I learned that being an editor probably wasn’t going to be my future career, even though I loved helping people. Through each activity I was in, I crossed off what I didn’t want to be. I was still waiting for that coveted “aha!” moment where I would know that I was where I was supposed to be.

In that spring of sophomore year, I had also decided to take a public relations class for my journalism minor. Public relations was a foreign concept to me, and I had no idea what to expect. Professor Dave Madsen created a hands-on class experience where each student in the class, within groups of five, were responsible for creating a public relations campaign for a local nonprofit. In typical Morningside fashion, my group stepped out into the community, partnered with Meals on Wheels, and developed a program that would facilitate growth in volunteer numbers. Academically, I received an A. Personally and professionally, I discovered my passion.

It was in the months following the conclusion of that class that I realized how much I missed the work we had done. Wrapping up our project at the end of the semester and handing our nonprofit representatives their finished plan helped me realize that I had finally found the path I wanted to tread within my future career. Somewhat. It was a little bit of that “aha!” feeling I had been wanting, but not exactly. I knew there was still something missing.

Immediately following that semester, I went on a May Term to Italy and Greece and was supposed to be a tutor for English when I returned. The tutoring fell through, and I was desperate for a new summer job, so I made a “hail mary” attempt by emailing Erin Edlund to see if she had any ideas about who would employ me. Being the Vice President of Marketing and Communications at Morningside, I figured she would have some idea of what was available. I basically said, “Hi, I’m Mari Pizzini and I would love to work for you. Do you have any jobs available?” Luckily for me, Erin was working on creating and sustaining a brand new intern program in the revamped Marketing and Communications department. Yes, it was all brand new. To me. To her. To everyone, technically. I came in for my interview and the first question she asked was “Do you like to write?” I have never answered a question faster, and it was a resounding “Yes.” 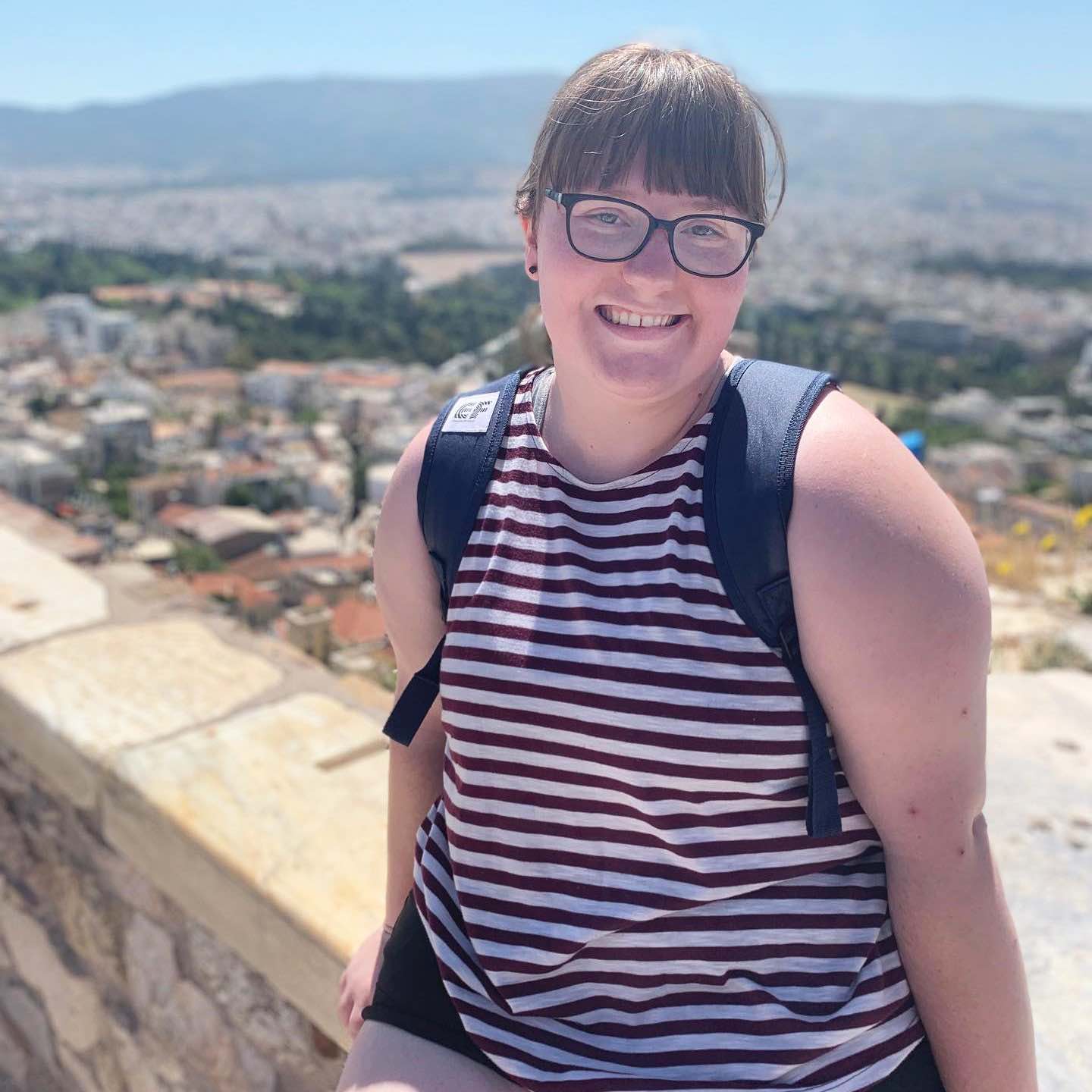 Less than a week later, I was thrown into website planning, content writing, and the request to make all of Erin’s “dreams come true” by developing a new process for highlighting our faculty on social media. Honestly, I sat at my desk paralyzed for about five minutes. Then I started working.

Within the first four months of working in the marketing department, our team had learned a new content management system, launched a website from scratch, developed a new video series, and broadcast the launch of a new Doctor of Nursing Practice program. In addition, a new Associate Vice President of Marketing and Communications had been hired, and our department had finally become one with Public Relations and Sports Information. I tried my hand at video editing a few times, laughed, sang, and almost fell out of a golf cart on more than one occasion, and had overall strengthened my communication skills.

I don’t exactly remember when my “aha!” moment happened, but I know it was somewhere in all those months of crazy odd jobs. I do remember looking at the résumé of our new Associate Vice President and thinking “I could go to grad school for this?” That was when I realized all of my options were still open, and while everything my first two years had shown me what I didn’t want to do, these were definitely the moments that showed me what I did want to do.

I can honestly say that walking onto campus in 2017 without an idea in the world of what I wanted to do as a career was terrifying. But I can also say that Morningside’s commitment to offering students countless opportunities to have new and meaningful experiences during their time on campus was imperative to my figuring it out.

The experiences I had outside of the classroom changed my life. That’s not supposed to be a cliché or an exaggeration, but the cold hard truth about what experience provides a student. In the simplest of terms, it allowed me to learn hands-on where my passions lie. I wholly believe that a career should be driven by passion, and my journey with experiential opportunities has given me the chance to experience just that. Erin likes to call this the vision within the blur. I like to call this finding my clarity within the unclear.