One of the most exciting parts of turning 18, or 19 if you’re a Nebraska kid like me, is finally getting all of the responsibilities of being an adult. This newfound freedom is liberating, allowing for your next chapter of life to start! But these responsibilities are not light by any means – especially when it comes to your civic duties within our democratic government.

Voting is a great way to take part in our democracy here in the U.S., but it also can feel like a lot of pressure. For my first local election, I attempted to do research on my own and ended up feeling deflated both because of the overwhelming amount of media and underwhelming lack of actual explanation of the candidate’s views on different policies. For this year’s election, though, Morningside definitely helped me feel more prepared – and like my vote actually mattered. 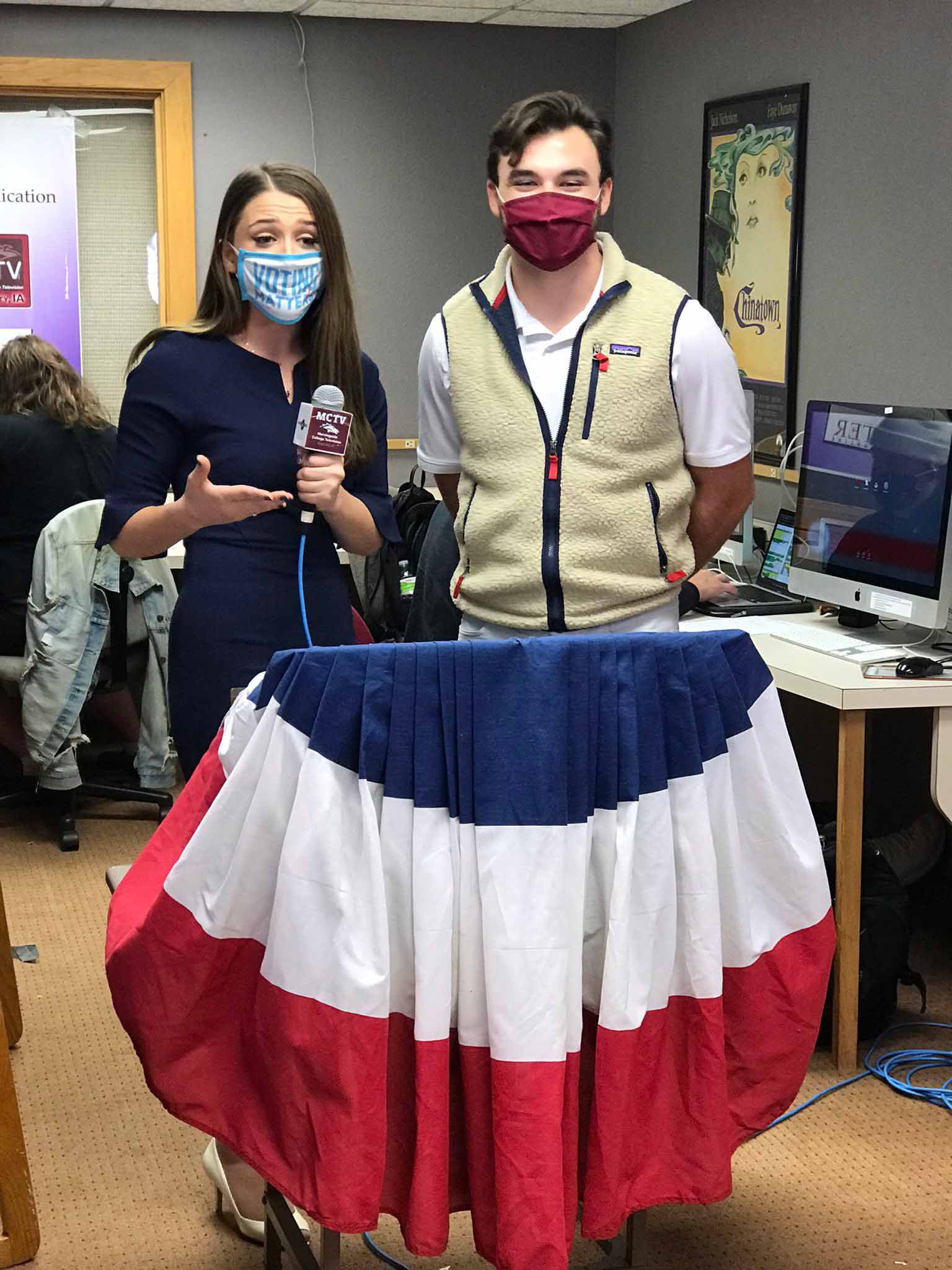 For the 2020 Presidential election night, 32 Morningside students from all different majors took over MCTV’s YouTube channel to cover the progress of the election. Though I wasn’t directly involved, I was an active observer of the coverage and a participator in the events leading up to election night. And let me just say, the dedication to this student-led event was amazing.

Garrett Arbuckle, a political science major and sophomore here at Morningside, did a great job of planning and organizing the event. I had multiple opportunities to talk with him during political activities, like the debate watch party, and also got to watch his creative process at work during a KMSC meeting. From the start of the process, it was clear how passionate he was to have the night be as productive and informative as possible. I know for students like me, who aren’t as knowledgeable on political topics but want to be, it was inspiring to see his commitment to our campus.

As a journalism minor, I was interested in what ignited his involvement in the election night coverage. He told me his overall interest in politics and civic engagement was because he believes there are so many different facets of life that are engulfed by politics and the government. For election night, he got to merge his interest in media with political science, using MCTV and KMSC as platforms to connect with the campus community and help educate fellow students on the importance of civic engagement. Garrett gained hands-on experience in his field and ended up learning a lot about what it takes to actually cover a huge political event like this. 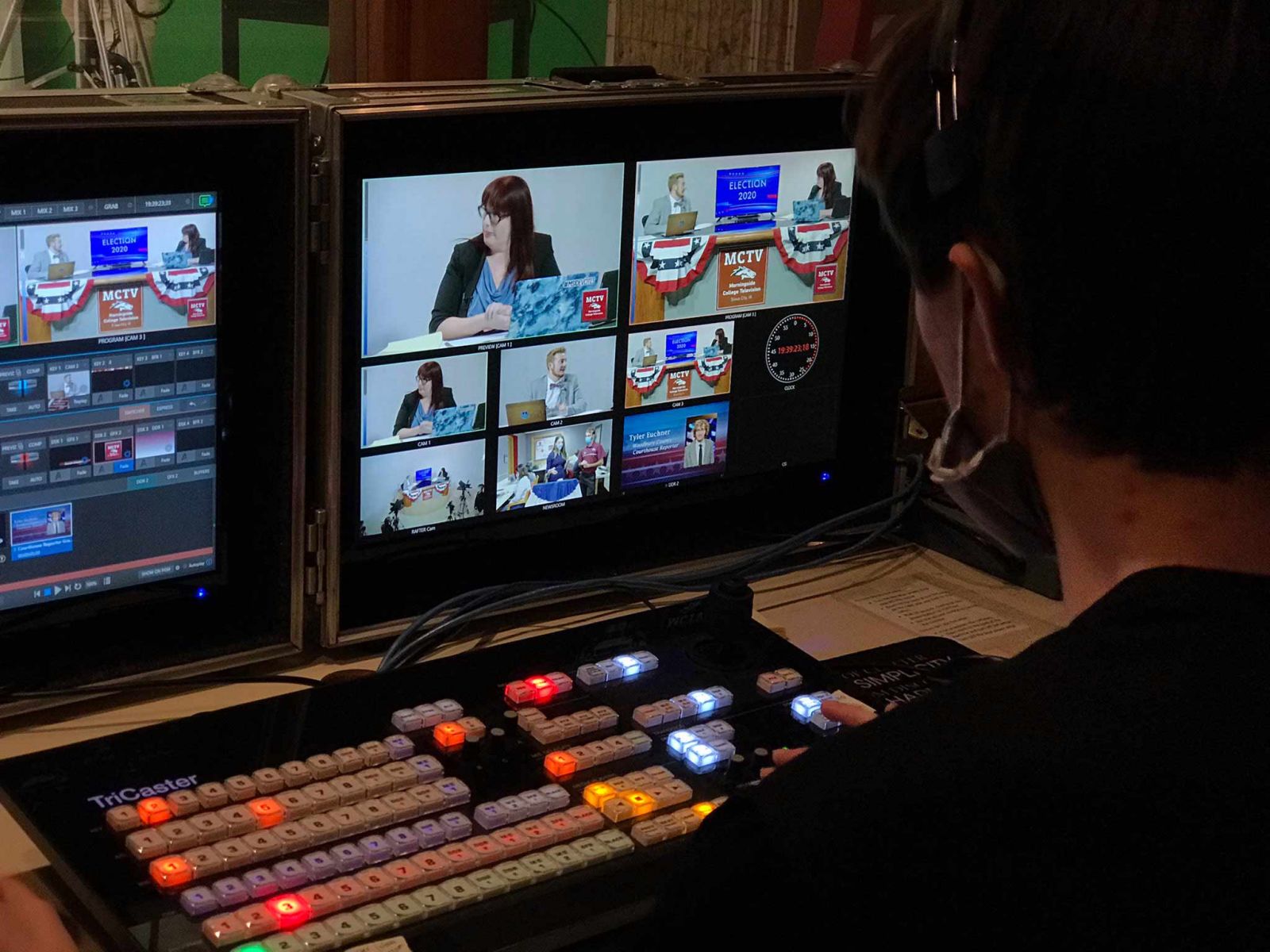 Beyond election night coverage, Garrett was involved with multiple political events throughout the semester, like helping with voter registration booths during political debates, encouraging students to learn more about the candidates, and even anchoring the coverage with Dr. Valerie Hennings. Garrett is one of many students who give their time and energy to promoting civic engagement at Morningside. Some of these students, like Hannah Capps and Samuel Peterson, were actually recruited to help out with election night from Dr. Hennings’ Campaigns and Elections class. They were behind-the-scenes volunteers, watching polls for different races around the nation, and keeping the anchors up-to-date with the latest results. On the other hand, students like Iggie Estupinian from the Mass Communications department focused on providing public service announcements and other scripts for the anchors to report on. Plus, there were plenty of roles to fill that didn’t require prior experience, making this a great opportunity to gain experience regardless of major.

Civic engagement is a big responsibility and Morningside’s dedication to educating and encouraging students to get involved in politics shows just how important it is to the overall Morningside experience and life after graduation. In my opinion, one of the best parts about Morningside is how many opportunities there are to get involved, even in areas that students aren’t majoring in. Being able to be a big fish in a small pond is exactly what drew me to the school! Knowing that Morningside cares that I am educated within the area of politics, offering up some great resources as well as involvement opportunities, lets me know that, in the long run, my vote is important.