There has been no shortage of opportunity during my first two years at Morningside, and I have made a point to take as many of those opportunities as possible.

I am a junior Mass Communication student here at Morningside College. When I was searching for colleges, I was impressed by the variety of opportunity Morningside offered compared to other colleges I was considering, and even more impressed that I would have the option to be part of active learning experiences right away.

I wasted no time in getting involved, doing my own show on the campus radio station KMSC in my first months at Morningside. Becoming on-air talent quickly cultivated my development as a broadcaster and gave me confidence that I was pursuing the right major. I likely would have had to wait until I was a junior or senior before getting an on-air timeslot at a larger college or university, so having this assurance so early was big for me – not to mention it allowed me to build my resume more quickly.

Working on-air has also led to some honors that I didn’t initially expect. Morningside often submits audio clips for consideration in the Intercollegiate Broadcasting System Awards (IBS Awards), which is a nationwide awards program recognizing excellence in student media such as TV, radio, and social media.

I have attended the IBS conference in New York City twice, submitting clips for IBS Awards each time. Three submissions have been selected as finalists. To know that my work is considered some of the best in the country and competitive with much larger universities is a huge thrill for me, and a testament to my Morningside experience. To be able to compete at that level is a huge achievement for both the Mass Communication department and the college as a whole.

As part of my on-air experience, I have spent a lot of time doing color commentary and coverage of Morningside’s 28 varsity sports. I’ve broadcast for a wide range of sporting events, covered two national tournaments, and have benefitted from Morningside’s partnership with local radio station KMNS. Doing work for KMNS has given me an even broader range of experience, allowing me to go on the road for Morningside and other area college events, as well as to cover the NAIA Men’s Basketball tournament. The variety these experiences have offered have left me prepared for any kind of sports broadcasting opportunity I might be offered. 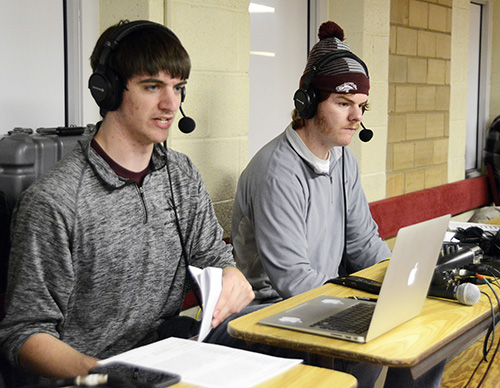 Having found a love for sports broadcasting, I elected to expand my knowledge even further with an internship in Morningside’s marketing, public relations, and sports information department. That opportunity has allowed me to work with event management, social media, website management, recaps and press releases, and other writing assignments. It has really allowed me to broaden my thinking about what my career might look like after college and become more effective in my work.

The experiences I’ve had at Morningside in both Mass Communication and interning with our marketing department have been amazing, as has been my overall experience here. I appreciate that I am being challenged and offered so much fresh perspective. It’s helped me to grow not only as a future broadcaster, but also as a person.