Chris Schiltz was a three-time All-North Central Conference (NCC) outfielder and one of the greatest hitters in Morningside College history. 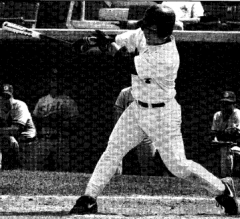 Schiltz was a first-team All-NCC performer as a freshman and sophomore and a second-team All-NCC pick as a senior. He graduated with three of the four highest single-season batting averages in Mustangs’ history, including a school-record .483 in his 1995 sophomore campaign to lead the nation in the NCAA Division II ranks. Schiltz collected 212 hits in 505 career at-bats for a .420 batting average with 49 doubles, four triples, 21 home runs, 151 RBIs, 104 walks, and 15 stolen bases. His .420 career batting average and career totals of 121 runs, 212 hits, 49 doubles, 151 RBIs, and 104 walks were all school records at his graduation.

“I was fortunate to be a part of Morningside baseball when the program was able to make Lewis and Clark Park it’s official home,” he reflected. “Any time you have an experience as a student- athlete, you learn many things. You can utilize a degree in so many ways.”

Schiltz is a co-owner of Mid-American Transport, a logistics business that deals with refrigeration transport. He, his wife, Shannon, and children, Ryan, Kara, and Ella, reside in Estherville, Iowa. You can hear more of Chris’ Morningside story at https://downthemsideline.podbean.com/ or through the Apple and Spotify podcast apps.

Jack Rother was a standout guard who graduated as the third leading scorer in Morningside history with 1633 career points and as the college’s all-time leader with 185 career steals.

Rother averaged 12.5 points and 1.4 steals per game over his four-year career and was a two- time NAIA All-American and three-time all-GPAC performer. He was also a two-time Academic All-American, earning second-team honors as a junior and third-team honors as a senior. Rother was named Morningside’s MVP following his junior and senior campaigns. He helped lead the Mustangs to two NAIA national tournament appearances, the 2006 GPAC postseason tournament championship, and the 2007-08 GPAC regular-season title. Rother was the leading scorer for the Mustangs’ 2007-08 team that posted a 29-4 record to set a school record for victories in a season, set a school record with a 23-game winning streak, won the GPAC championship with a 16-2 league record, and reached the Elite Eight of the NAIA Division II national tournament.

“I had always wanted to play college ball,” Rother said. “Coach Sykes’ program was special --- just getting some momentum --- and I wanted to be a part of it. (The Morningside experience) gave me so many great things, though. I met my wife there, got a quality education and was able to get my career path set.”

Rother is a certified financial planner at Calmwater Financial Group. His wife, Teryn, and children, Avery, Amic, and Abren, reside in Norfolk, Neb. You can hear more of Jack’s Morningside story at https://downthemsideline.podbean.com/ or through the Apple and Spotify podcast apps.

Chad Hustedt is one of the most decorated football players in Morningside College history.

A four-year starter, Hustedt received All-America recognition as a sophomore, junior, and senior, and is one of a limited number of players in Mustang history to be named first-team all- GPAC three times. Hustedt is the program’s all-time leader with 228 career solo tackles and 527 career interception return yards. He also amassed 182 assisted tackles, 410 total tackles, 25 pass breakups, 19 interceptions, 14 tackles for losses of 50 yards, four fumble recoveries, and two quarterback sacks during his career. Hustedt averaged a whopping 27.7 yards per interception return, too. He helped lead Morningside to a record of 38-10 and four NAIA postseason playoff appearances from 2004-07.

Hustedt played one of the greatest games to lead the Mustangs to a 45-14 victory against Jamestown in the first round of the 2007 NAIA championship series. He intercepted two passes and returned both for touchdowns with runbacks of 99 and 54 yards, had two fumble recoveries, and topped the Mustangs’ tackle chart with six solos and three assists for nine total tackles. The 99-yard run back is the longest interception return in Morningside history, and his 153 interception return yards set a Morningside single-game record and broke the NAIA’s single-game postseason record.

Aside from his football exploits, Hustedt was also a two-year letter winner as an outfielder for the Mustangs’ baseball team. After hitting .256 as a part-time starter as a freshman, Hustedt batted .273 as a sophomore and ranked second on the team with 14 walks and 13 stolen bases and third with 28 runs.

“I had several great people around (at Morningside) to get me to where I was,” he noted. “There were so many great relationships with teammates and coaches. We still talk a lot.”

Hustedt is a wide receivers coach and co-offensive coordinator at NCAA Division III Buena Vista University in Storm Lake, Iowa. He, his wife, Jennifer, and children Paisley, Presley, and Grady, reside in Storm Lake. You can hear more of Chad’s Morningside story at https://downthemsideline.podbean.com/ or through the Apple and Spotify podcast apps. 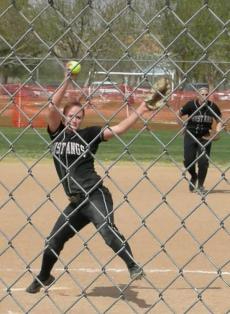 Whitney (McElrath) Lloyd was a standout softball pitcher who won a school-record 92 games during her four-year career.

Lloyd was an NAIA honorable mention All-American as a sophomore and made the NAIA All- America second team as a designated player following her junior campaign. She was a three- time first-team all-GPAC and a two-time NAIA all-region performer. Lloyd had a 92-42 record with 28 shutouts, and a 2.02 earned run average and struck out 622 batters in 860.2 innings pitched over her career. At the plate, she batted .320 with 40 doubles, 19 home runs, and 124 RBIs.

“The entire experience was awesome and went too fast,” she said of her Morningside experience. “Being there was the best decision I could make. The most important reason for me (choosing Morningside) was to not just be another number. The professors are so caring, and the coaches are great.”

Lloyd is a registered nurse at Family Health Care in South Sioux City. She, her husband and former Mustangs’ baseball student-athlete Corey, and children Calan, Maylee, Haddie, and Theo, reside in Moville. You can hear more of Whitney’s Morningside story at https://downthemsideline.podbean.com/ or through the Apple and Spotify podcast apps.

McCabe was a gridiron standout for the former Chiefs during the North Central Conference days. 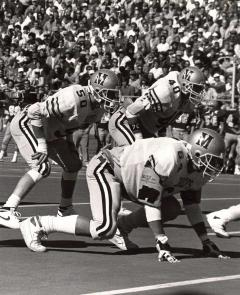 He arrived with what he described as a strong recruiting class in 1983 and was a starter early in his career. After a one-win campaign as a freshman, he played for 6-5 and 7-3 teams as a sophomore and junior. The 1985 squad narrowly missed an NCAA Division II playoff berth. They tied eventual national champion North Dakota State University on the road, lost a close- knit decision at the University of South Dakota, and missed a late field goal that would have beaten the University of Nebraska-Omaha on the road. During his senior year, in 1987, after an injury sidelined him the previous season, Morningside finished 4-7. McCabe’s gridiron story didn’t end in Sioux City, though.

“I was offered a free-agent contract with the New Orleans Saints (after college),” he said. “I was with the team for most of camp and got cut among their final decisions. It was a great opportunity, though, as I was able to play in several preseason games, including one in the former Metrodome.”

“Morningside holds so many great memories for me,” he continued. “It’s given me so many life- long friendships. I still hang out with those guys (from football). The educational experience proved very beneficial for me, especially the small class sizes.” Tim is Senior Vice-President of Sales at Sterling, a technology provider to federal, state, and local government agencies and educational accounts. He and his wife Mary Beth, also own

Jimmy John’s franchises in Carroll and Sioux City, Iowa, and Vermillion and Yankton, S.D. They are parents to a son, Zach, and daughters Kelsey, Rachel, and Samantha. You can hear more of Tim’s Morningside story at https://downthemsideline.podbean.com/ or through the Apple and Spotify podcast apps.

Callahan led the Morningside College men’s basketball program from 1973-86. The then Chiefs turned in some halcyon days with him at the helm, producing six .500 or better marks, which included back-to-back 20-plus win seasons in 1982-83 and 1983-84.

In those two years, Morningside was the toast of the North Central Conference. The 1982-83 squad finished 15-3 in the conference en route to the championship. That run featured nine consecutive victories late in the year, including toppling the University of Nebraska-Omaha and North Dakota State University in the NCAA Division II regional and advancing to the Final Four. In 1983-84, the team had to rebound from a pair of close-knit losses to the University of North Dakota and NDSU that led them to place second in the conference. They did so in the postseason, defeating North Michigan University and the Wayne State University of Michigan to make it to the national tournament again.

Callahan’s program influence, which led Morningside to 176 wins, can still be felt today. Three of his players, Mark Faber, Steve Brandsma, and Daryl Schnoes, rank among the top 20 all-time scorers, while he coached Mark Mohl, another member of the prestigious fraternity, for one season. Doug Marx and Dave Schessler, two more student-athletes he mentored over 13 seasons, have a high residence on the career scoring and offensive rebounding average categories.