Anyone that has attended a Morningside event where food and beverage are served knows they can expect an impressive spread with the details well-imagined. Since 2012, one of the people behind the magic of Morningside events catered by Sodexo has been Katie Sullivan ’22.

Katie has put a bow on all sorts of events as the campus catering manager. She would also be the first to tell you that commencement time is always particularly special. In 2022, it took on a whole new meaning for Katie when she completed the requirements for Morningside's online business bachelor’s degree completion program and found herself at the center of the commencement festivities.

“I love working at Morningside, and I loved learning at Morningside. Finally achieving my goal of earning a bachelor’s degree from a place that I have come to know and love so much is pretty incredible. I have always enjoyed getting to celebrate what Morningside students do. It hit different to know that this time, I was one of those students,” shared Sullivan.

Katie’s journey to earning a degree has been one with many on- and off-ramps. She first considered enrolling in art school after moving with her husband to Oregon nearly two decades ago. Ultimately Katie decided against enrolling and instead began working at a resort. There, she began honing her hospitality skills and setting the stage for a career she had yet to consider.

In 2009, Katie and her husband found themselves back in Siouxland. Katie knew she wanted to find a career where jobs would be plentiful, so she made the decision to enroll in a nursing program.

“I wanted to do something practical. Turns out that wasn’t for me. I got close to finishing my nursing degree, but it was a struggle the entire time. My heart simply wasn’t in it,” she remembered.

While in nursing school and after, Katie was also working for a few different restaurants and businesses around town to continue the work she enjoyed in the hospitality and service industry. It was also around this time that Katie and her husband made the decision it was time to grow their family, and Katie became more determined than ever to find a career where she could grow and thrive.

“I started with Sodexo at Morningside when I was pregnant with my first child in 2012. I really liked being part of the Sodexo family, and the fact that Sodexo was at Morningside made it even better because of how great the campus community is,” shared Katie.

Once in her new job, Katie hit her stride. She found herself loving the opportunity to get to know the students at events, as well as students who worked with her in food services. Katie especially excelled in the role of catering manager. Through that work, Katie frequently worked with President Emeritus John Reynders and his wife Robin. That relationship eventually blossomed into a deep friendship. 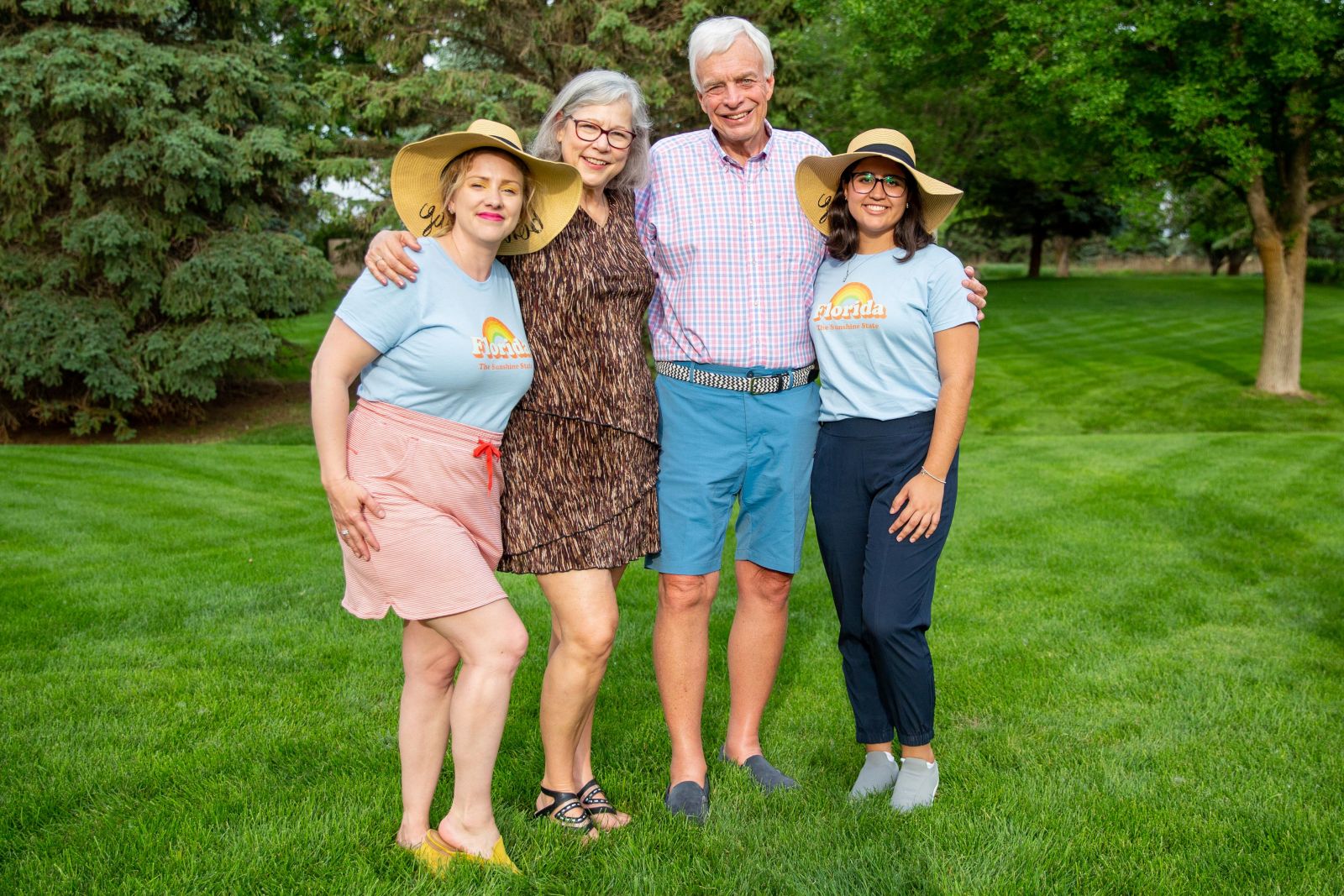 “I grew very close to John and Robin. We are besties. They were always supportive of the work I did, and I enjoyed capturing their vision for events,” recalled Katie. “They invested in me as a person. That included asking me if I wanted to earn a degree and what they could do to support me while I earned it.”

As Katie continued to flourish in her work, the Reynders took note of the fact that Katie had a significant impact on the students working alongside her. They saw that the relationships Katie formed with students extended far beyond catering, and that she was often an inspiration to those students working hard to earn while they learned at Morningside. When the Reynders pointed this out to Katie, she knew what she wanted to do.

“Hearing John and Robin tell me that students viewed me as a mentor was very uplifting. It helped further fuel my desire to get that degree, so I decided to do it.” 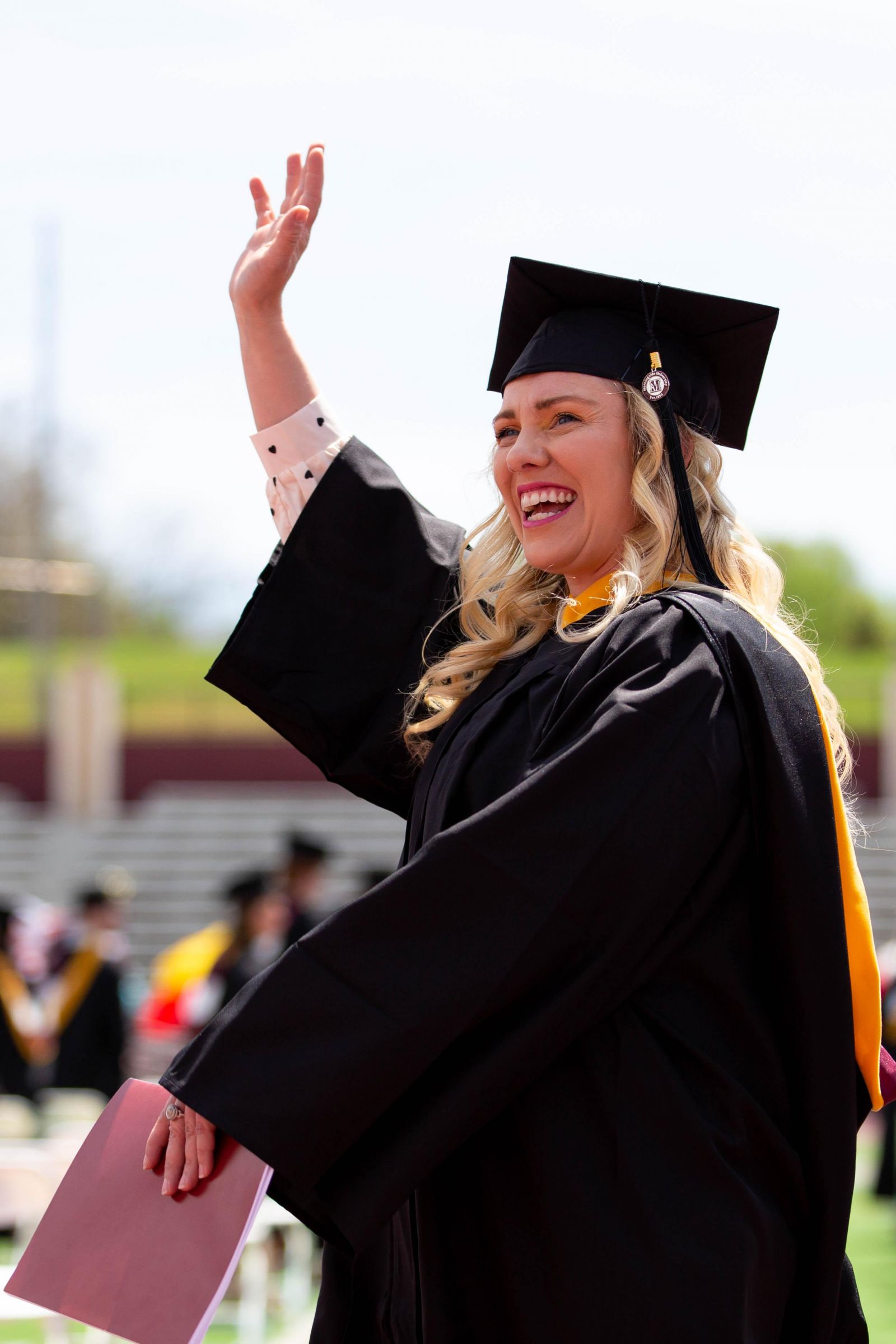 Katie made the decision to enroll at Morningside in 2019. As a wife, proud mom to five boys, and a dedicated working professional, she needed a program that offered flexibility. The Morningside online business bachelor’s degree completion program in the School of Business was the answer.

“I was nervous about the technology learning curve of an online program, but like with so many things at Morningside, my instructors and fellow students all came together and helped me  figure it out. The technology was easy after that. I found myself really connecting with my classes and being able to apply what I was learning to my work right away. I knew I had found the right program for me.”

Katie initially planned to take whatever time she needed to finish her degree. However, after President Emeritus Reynders announced his retirement shortly after she began in the program and then COVID-19 delayed his retirement a year, Katie made the decision she was going to make every effort to graduate by 2022 so the man who had helped inspire her to finally get her degree could be the one to hand it to her.

“I am so glad I was able to walk across the stage to receive my Morningside degree at John’s last commencement ceremony. He and Robin mean so much to me. It was a great moment,” shared Katie.

With her bachelor’s degree now complete, Katie is now back to focusing on her family and a new role having recently being named the new operations director for Sodexo’s Morningside unit – a promotion granted thanks to her new degree. She also encourages anyone out there who, like her, may not have taken a traditional or typical road to earning a degree to not let that stop them.

“There are so many more nontraditional students out there than people realize. A college degree does not have to happen right out of high school. It is okay to get those life experiences and figure out what you really want,” Katie reflected, also noting, “If you are thinking about getting a degree, do it. Think about how you can use it and what you can gain from it to improve yourself. The beauty of education at places like Morningside is that you can customize what you learn to get the experience, skills, and knowledge you want.”

What was your favorite class or project?

"I really liked the capstone course, but the whole program is customized to the student. There are many different kinds of students with different professional backgrounds. It's an opportunity to learn about different organizations and cultures, but also really customize the learning to make sense for your own interests."

What was something about the program that really resonated with you?

"I really enjoyed being able to focus on learning about women in business and the ways women are still marginalized. Women still are not as frequently found at the executive level and more female leaders are needed. Even at good organizations, there are still challenges and discrimination. Spending time understanding and thinking about that was important to me."

What were the keys to successfully completing your degree?

"Time management and goal setting, which are also big parts of my job. It was another way that what I was learning was also immediately applicable to things I was also doing at work."