On March 7, 1965, an event that came to be known as Bloody Sunday unfolded as a group of 600 civil rights activists, including the late Congressman John Lewis, attempted to march from Selma to Montgomery and were attacked by Alabama state troopers at the Edmund Pettus Bridge and beaten back to Selma. Two days later on March 9, 1965, Dr. Martin Luther King Jr. led 2,000 marchers across the Edmund Pettus Bridge in Selma, Alabama.

When asked for a statement following the march, Dr. King said, “While rageful violence continues toward the unarmed people of Selma, while they are assaulted with tear gas and batons like an enemy in a war, no citizen of this country can call themselves blameless, for we all bear a responsibility for our fellow man. I am appealing to men and women of God and goodwill everywhere, white, black and otherwise, if you believe all are created equal, come to Selma. Join us. Join our march against injustice and inhumanity. We need you to stand with us.”

Over 1,000 miles away, Sibley native Tim Tillotson watched the interview in his dorm room. King’s words resonated with him and his friends, and they decided right then and there to go to Selma. The group worked with the student nonviolent coordinating committee to line up housing and arrange to miss class. After sorting out the details, Tim and his friends drove to the march, crossing the Edmund Pettus Bridge on their way.

Over 50 years later, Tim is reflecting on the experience of being moved by King’s speech and driving to join the movement.

“One thing that struck me about the experience was that I could leave, but there were hundreds of people there who didn’t have that privilege,” said Tim. “Their courage to face the hostility and venom of people on the sidewalks and police using force against them was unforgettable.” 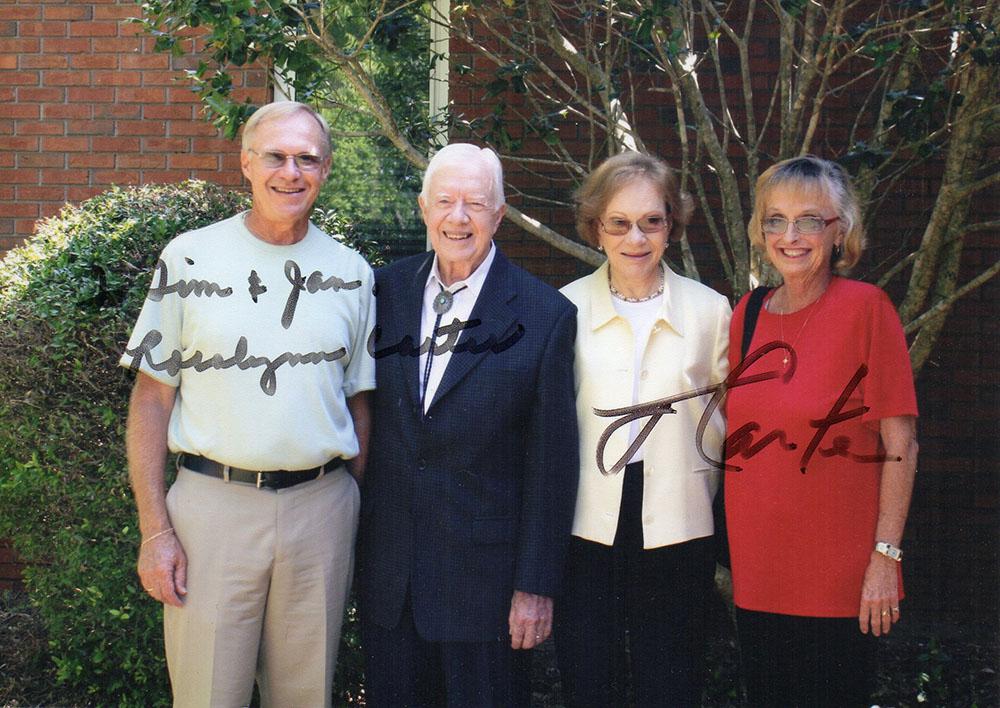 Tim and Jan Tillotson with the Carters

Since his experience in Selma, Tim has reread the speech King gave on the steps of the state capitol building in Montgomery [known as ‘How Long, Not Long’ or ‘Our God is Marching On!’] and found himself left with a sadness and frustration that racism remains so prevalent today.

From voter suppression tactics to laws disallowing discussion of racism in America’s past and present, Tim and Jan, like many Americans who lived during the civil rights movement, are saddened and shocked to see that many of the things Dr. King and activists fought for then continue to be attacked today. Though the future looks bleak at times, the couple remains committed to supporting civil rights and educating themselves on racism and oppression together and with members of their community.

“Jan and I are part of a group called Community Conversations at a church in St. Augustine, Florida. There’s about 30 people in the group and we meet by Zoom,” Tim shared. “Something that really stuck with me from our conversations was understanding that racism happens at multiple levels - personal, interpersonal, cultural, and systemic. It’s been an eye-opening experience.”

Though Tim and Jan are actively educating themselves and being involved in their communities now, Tim admits that he didn’t participate in as much activism as he would’ve liked since college. “Life happened, and I had this mistaken idea that the civil rights movement was successful and everything was okay after that,” said Tim.

Adlerian psychology, a school of thought that guided Tim and Jan’s social work practice and now their career in life coaching, brought him back to reality. Named for Alfred Adler, Tillotson says Adlerian psychology explores equality and inequality in human relationships. The philosophy resonated with him in graduate school and continues to do so today as he reflects on the experience of going to Selma and as he and Jan continue to examine their privilege and listen and learn from the experiences of people of color.

“I am passionate about this,” added Jan. “Tim and I have both had phenomenal training from professionals in the psychotherapy and mental health world, and I don’t think I’ve ever experienced anything as effective as the conversations we are having in the Community Conversations group and the understanding gained from Visions Inc. [a diversity, equity, and inclusion program used by the group] and books we’ve read like Ibram X. Kendi’s ‘How To Be An Antiracist.’”

While the Tillotsons primarily engage with social justice topics through their church in Florida, they reside in Tim’s hometown of Sibley for most of the year. The pair moved back to Iowa after spending over 30 years in Minneapolis practicing social work, psychotherapy, and life coaching. They hope sharing the story of Tim’s experience going to Selma and how it has influenced their past, present, and future will inspire students to see how what they are learning and passionate about now can continue to be an important part of their lives in the decades to come.

“Find opportunities to be engaged in your community by paying attention to what’s happening and being conscious of how it is affecting people,” said Tim. “The main thing I think about is keeping our eyes, ears, and heart open.”