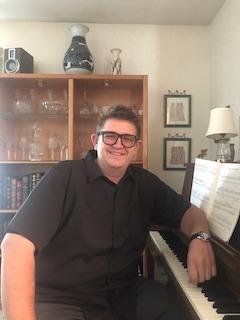 Morningside College graduate, Noah Towns, discovered his rock ‘n’ roll passion while at Morningside and set forth to become a professional singer with his band. During his time at Morningside, Noah was a part-time student majoring in Music Education, as well as a participating member of Phi Mu Alpha Sinfonia. When he joined Sinfonia, the group members noticed his tenor voice range, keyboard playing, and recruited him into the band as their lead singer and keyboardist. Noah recounts his favorite memories while at Morningside saying, “I met a lot of amazing men that I call friends. The fraternity also introduced me to Drew, Alex, and Clay, and we are still in a band together: Noah Towns and the Other Brothers.”

Noah also shared that he received a well-rounded education and Morningside helped him strengthen his craft of music to become a better teacher and musician. He explains that he has loved music from a very young age and enjoys playing with the band.

“The little things are what I try to focus on during each performance. The best feeling is when we’re all in sync, grooving, and we play tight; that feeling is unforgettable,” says Towns. “I also love it whenever Clay jumps off the stage and plays a solo while dancing and running around the audience. I can’t help but smile.”

Noah advises young Morningside alumni about life after graduation, “The world hits you like a ton of bricks once you start your career after graduation. I’m on the same boat and the seasickness gets to me sometimes. Don’t let it kill your spirit. Stay curious. Keep your faith in people.  Find the wonder and awe in the everyday. Be a good person and stay that way even when others are being awful.”