Jay Grooters didn’t envision a life as a stained glass artist for himself, but then again, he also didn’t have the typical college experience.

Jay arrived at Morningside in 1963 as a math major with a basketball scholarship. He jumped into campus life right away, and in his freshman year, he ran for and won class president.

From his experiences, Jay advises current and future students, “If you don’t have a clear view for your future, work on developing life skills while you study. Learn how to type, take a drafting course, learn how to iron your clothes and cook.” 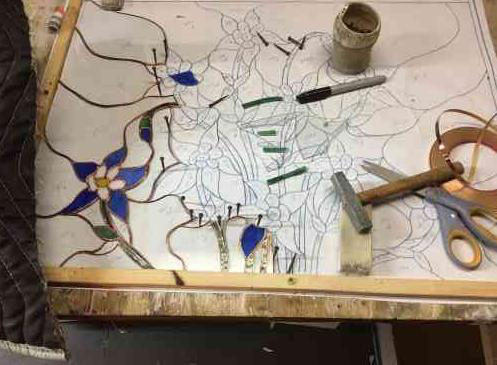 Jay recalls that as a college student, one of his greatest challenges was managing his responsibilities. That included working 40 hours a week while studying, as well as monitoring all that was happening at the time with the Vietnam War. Jay was just 14 credits away from earning his degree when he was drafted, but instead elected to join the Coast Guard for four years. Though Jay would never finish his degree, his journey would lead him to an incredible career he hadn’t expected, and the classes he took in college helped him to realize his abilities as a craftsman.

While working as a recruiter for the Coast Guard in Salt Lake City, Utah, Jay saw an ad for a class about creating stained glass. He’d always wanted a stained glass lamp, so he signed up for it. After that, he picked up a book on the topic (“How to Work with Stained Glass” by Seymour and Anita Isenberg) and found his way from there. 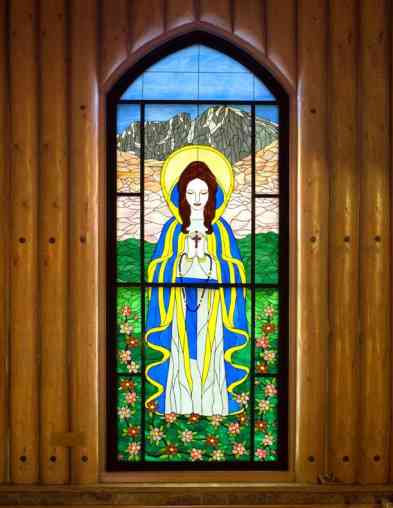 Jay now spends his time creating stained glass artworks in the Rocky Mountains and hiking in any free time he has. He describes the process of his work as “a glass jigsaw puzzle”. His initial design of any piece he is creating is transposed onto three copies of pattern paper through the use of large carbon papers. One copy is for cutting the pattern pieces of the artwork, which are then glued onto colored glass to be cut out. Another copy is for detail work, where he grinds the glass pieces down to their correct sizes. The last copy is used for constructing the actual window where the glass pieces rest while he connects them with bars and frames.

Although the process is tedious and time-consuming, Jay is inspired by seeing the end product, which makes it all worthwhile for him. To that end, he has taken on some big projects during his career, including creating 24 windows for Our Lady of the Mountains Catholic Church. Two windows from the set - Mary of the Mountain and St. Michael Slaying the Dragon - each have more than 1,000 pieces of glass.

His next project? Creating 15 windows for the same church.

Jay acknowledges that his path wasn’t typical and that other students out there may find themselves on a similar path, noting “Success comes in many forms. Find out what really interests you, and see if there are jobs in those areas that would work for you.” 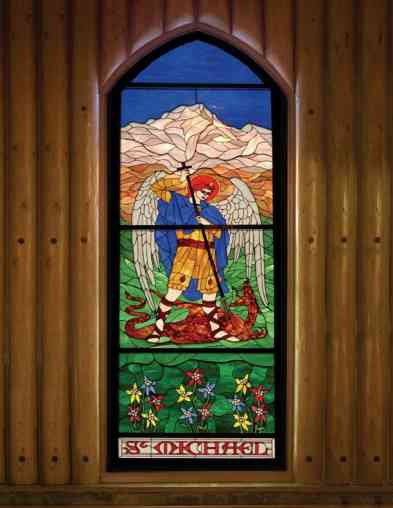 He also shared that the fundamentals like critical thinking and inquiry that are taught at liberal arts colleges like Morningside have been long-lasting skills. “The most important thing I took away from college was that I could solve any problem if I believed I could do itDespite not being a Morningside graduate, Jay still considers Morningside an important part of his story. He stays in touch with the college and even gives back when he can. “I would encourage young alumni to try and return the help you receive from your college. Though I only attended [Morningside] for two years, I have still tried to donate and give back over the years.”