When Morningside College officially announced it would become a university on Thursday, November 13, 2020, one of its oldest living alums was participating and cheering from his residence in Milwaukee, Wisc.

As part of the virtual celebration, Milford E. Jacobson ’40 – who goes by Jake – emailed Morningside a note of congratulations and shared a photo of himself posing in a Morningside College centennial sweatshirt. His photo was shared on Morningside social media accounts, and Jake went viral in the best way one can in 2020 - his photo received more than 700 engagements on Facebook and another 500 on Instagram, which ignited a series of conversations with the sharp, energetic 101-year-old. 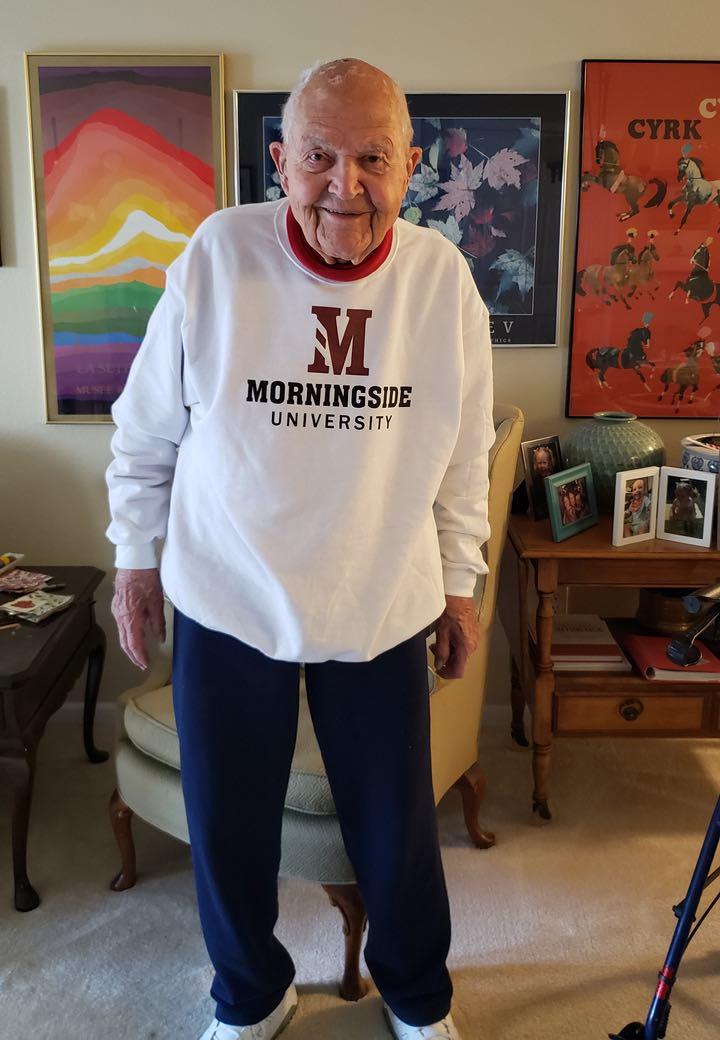 “I love Morningside. I do my best to keep up with what’s happening, and to stay in touch with people who I got to know during my time there,” said Jake, who was born in Wayne, Neb., moved to Terrill, Iowa, as a child, then made his way to Morningside in the late 1930s.

Jake’s father was a Methodist minister, and a major factor in Jake’s college decision was the fact that a portion of his tuition was covered at Morningside. What was not covered, though, was Jake’s responsibility. That meant Jake worked three jobs while pursuing his degree in accounting. He helped serve and cook at a local burger joint, was a night auditor at the Martin Hotel, and bused tables at Bishop’s Cafeteria.

It was working at Bishop’s that connected Jake to his first wife of more than 50 years.

“Two cute chicks come in. I gave one of them the eye and she gave me the eye, so I asked her to a movie. The rest is history,” said Jake. “We dated while I was at Morningside. I think Baccalaureate was on a Tuesday, and we were married that Friday. We were together for more than 50 years until she passed from Alzheimer’s.”

Jake later married again, to a woman named Rosemary. He was with her for 20 years until she passed from pancreatic cancer in 2011.

These days, he spends time with his friend Denny, who is another resident in Eastcastle Place where Jake lives.

Jake notes that long-lasting and healthy relationships of all kinds have been a key to his success and longevity in life.

“Skills and talent are great, but you have to have good personal relationships. Treat others how you want to be treated. Be kind to other people. I am amazed at how what you put out into the world comes back to you,” said Jake.

The adventures Jake has had throughout his life have certainly given him no shortage of opportunities to build relationships. Jake is an entrepreneur and professional who built and worked for several businesses. He went to Germany as a special agent in the United States Army Counterintelligence Corps during World War II. He has run 13 marathons and biked as much as 150 miles a day after giving up running. In 1981, he retired as vice president of human resources for Northwestern Mutual after 13 years with a company he truly loved. Jake is also a family man, a reader, a writer, an exercise and outdoor enthusiast, enjoys keeping up with current events, and is a self-proclaimed ‘feminist who was a feminist before it was fashionable’ thanks to his mom.

“There have been four strong and incredible women in my life, and my mother was the first. She was ahead of her time in thinking about the benefits of physical and mental activity, and that has always stuck with me,” Jake noted.

“Being outside with the trees and sky is freeing for me, and I think exercise is one of the most important things you can do for both your brain and body. I have friends here [Eastcastle Place] who have never exercised and are trying to build those habits now. It’s very difficult for them. Lots of people ask me what it takes to make it to 100. Exercise, getting outside, and making healthy choices have had a lot to do with it.”

Though Jake has been quarantining throughout the pandemic to protect his health, he says he has been able to continue to write, use technology, and get outside when he can to maintain his healthy habits. He also notes that gratitude has been a key to keeping his positive attitude both during the pandemic and in the decades leading up to it.

“Morningside used to require a Bible class, and one of my takeaways was the importance of gratitude. Gratitude is so important. Before I get out of bed in the morning, I think about all the things I had to be grateful for in the days before, and all the things there are to look forward to in the day ahead. It helps set a good attitude and mindset.”

Reflecting on his life, Jake was also quick to credit his Morningside education as being an important and long-lasting accomplishment in his life.

“I graduated and a whole lot happened in the world. No matter what the decades have brought, my Morningside degree has been a source of security and stability.”

Indeed; a degree that has endured, as has the 101-years-young man who earned it.